Is increased cocoa content in chocolates beneficial for health?

The Indian chocolate industry is poised to grow at a Compound Annual Growth Rate (CAGR) of 11 per cent for the period of 2022-28, according to a recent study conducted by BlueWeave Consulting, a market research firm. This growth, according to experts, can be attributed to the rising consumer awareness about the multitude of health benefits related to moderate consumption of chocolates.

While a variety of chocolates have started to populate supermarket shelves, dark chocolates — which have been associated with low sugar content — have, in particular, started to see an increase in percentage of “original cocoa content” which companies say is to cater to the health-conscious consumer. 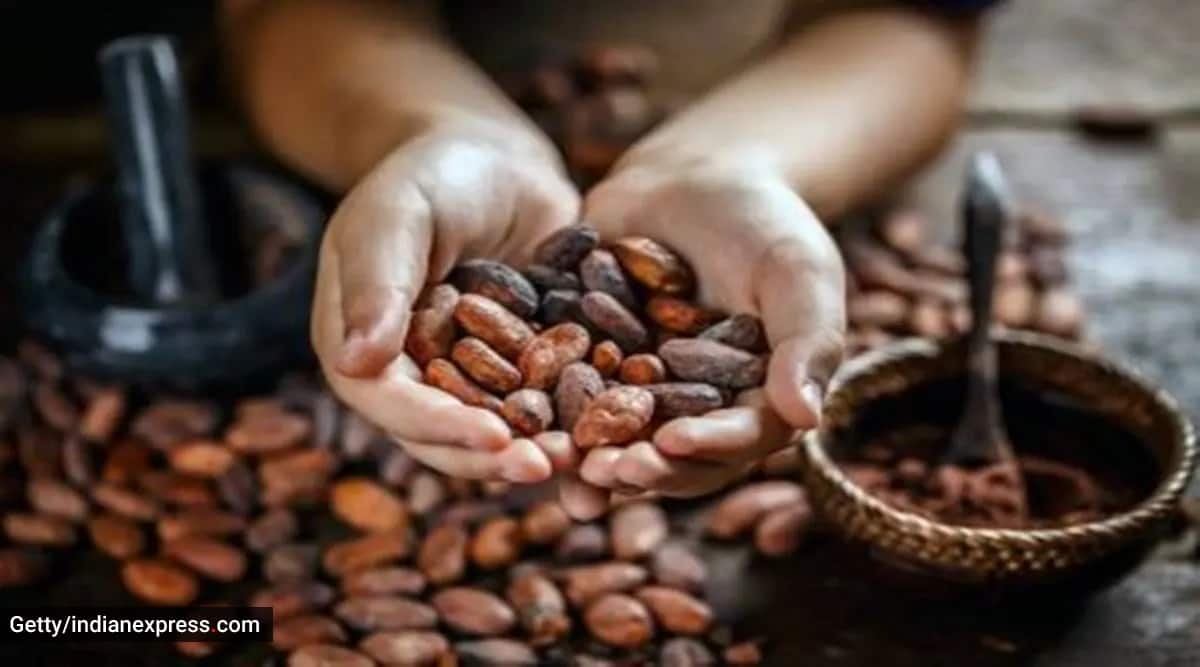 Seeds (or beans) are extracted from the cacao pod (Source: Getty Images/Thinkstock)

Companies, today, are providing even 100 per cent original cocoa in chocolates. This World Chocolate Day, celebrated annually on July 7, here’s what experts say on the trend of increasing cocoa content in chocolates.

According to Sharma, the ideal percentage of cocoa for the “perfect dark chocolate” is 55 per cent, while for a creamy milk chocolate, 37 per cent would be ideal. But according to Shashank Mehta, CEO and founder, The Whole Truth Foods, “around 70 per cent of cocoa, between cocoa solids and cocoa butter, might be the right balance for bringing out all the complex flavours of cocoa, and balancing it with sweeteners required to make the taste palatable”.

“A cocoa bean is intensely flavourful, with a versatile range of flavours. Increasing the concentration of cocoa, if done properly, increases the complexity of flavours in the end piece of chocolate you consume, and hence enhances the eating experience,” he described. Mehta added that dark chocolate enables one to access more flavours of the cocoa, because it has less fillers. Since the past couple of years, dark chocolate has gained tremendous popularity, shared Srinath Balachandran, managing director, ZUKA Chocolates. “Cocoa is the main ingredient of dark chocolate. It is considered that bitter chocolate is better. High content cocoa will always be appreciated by connoisseurs,” said the chocolatier who undertook training in France.

For the unversed, cocoa inherently has a bitter and deep taste since it has theobromine which gives its “stimulatory characteristic and pleasantly bitter taste”, and hence increasing cocoa percentage changes the taste of the chocolate a lot, said Mehta.

The chocolate making journey, according to Harvard School of Public Health, begins from a cacao pod, larger than the size of one’s hand. Seeds (or beans) are extracted from the pod and fermented, dried, and roasted into cocoa beans. Then the shells of the bean are separated from the cocoa nibs. The nibs are ground into a liquid called chocolate liquor, and separated from the fatty portion, or cocoa butter. The liquor is further refined to produce the cocoa solids and chocolate that we eat. “After removing the nibs, the cocoa bean is ground into cocoa powder that is used in baking or beverages,” it reads.

According to author Ramesh Sirohi’s book Cocoa Production and Processing Technology, 1 kg (2.2 lb) of chocolate, about 300 to 600 beans are processed, depending on the desired cocoa content.

Interestingly, artisanal or luxury chocolates, usually made with rarer types of cocoa bean, or strains of cocoa bean that are harder to grow, almost universally are dark chocolates. “Many times, these are also single origin cocoa beans, coming from a single farm in a specific location, thus having concentrated and unique flavours. But the single most consistent thing about luxury chocolates might be that they contain just cocoa and a sweetener and nothing else. These chocolates are conched and handcrafted from bean to bar in-house,” said Mehta.

Agreed Balachandran and said that such plantations are also there in India, such as in Tamil Nadu’s Pollachi town in Coimbatore district which is becoming quite popular for its Indian cocoa which has a very “distinctive taste”.

Chocolate can be more than a dessert, when it is clean and well-made, said Dr (Mr) Kiran Rukadikar, bariatric physician and obesity consultant, and founder of DietQueen App.

As cocoa is a highly concentrated food, it provides approximately 1 calorie per 1 gram, but also provides carbohydrates, fat, protein, and minerals, said Dr Rukadikar. “Its theobromine and caffeine content produce a mildly stimulating effect. The carbohydrates and easily digested fats in chocolate make it an excellent high-energy food,” he said.

“Cocoa contains various phytochemicals, such as flavanols (including epicatechin), procyanidins, and other flavanoids, which work as antioxidants, good for heart and overall health. The use of flavanol-rich chocolate and cocoa products might cause a small (2 mmHg) blood pressure lowering effect in healthy adults — mostly in the short term. Do you love dark chocolate? Here’s what to keep in mind (Source: Getty Images/Thinkstock)

“Chocolate contains the chemicals — phenylethylamine and serotonin — which are thought to be mood boosters and mild sexual stimulants. Eating chocolate makes you feel good, even euphoric. But the aphrodisiac qualities of chocolate are more about the sensual pleasure of how it melts in your mouth than as a sexual stimulus,” said Dr Rukadikar.

Even though dark chocolate contains good-for-you flavonoids, it also has “not-so-good-for-you fat, sugar, and calories”, said Dr Rukadikar. “So limit the portion size. Overindulging in chocolate can undo any health benefits and lead to weight gain and related health problems. A small portion of about an ounce should satisfy your taste buds — especially if you eat it slowly — and provide chocolate’s health benefits without widening your waistline,” he said.

According to Balachandran, milk and dark chocolates provide the same energy. “It is roughly about 500 calories per 100 grams. Milk chocolate is more sugary but dark chocolate’s fat content is higher because it is richer in beans and cocoa butter,” he said.

Dark chocolate may taste bitter, but that doesn’t mean it’s free of refined sugar. “The daily recommended intake of sugar for an adult female is 100 grams, and for an adult male, it is two-thirds of that amount. And since it isn’t sweet, you can be tempted to eat more, thus increasing your intake of simple carbohydrates,” described Zamurrud M Patel- RD, chief dietician, Global Hospitals, Parel, Mumbai.

Since dark chocolate is known to lift mood, there is a tendency you will be dependent on it each time you need a boost, Patel warned. “Cocoa has measurable amounts of caffeine which, in large doses, can cause palpitations, insomnia, anxiety, and miscarriages among pregnant women. Dark chocolate also contains saturated fat, especially if it is made with milk chocolate,” said Patel.

Sugar and fat content varies among chocolate manufacturers, so it is advisable to check the nutrition label, advised Anam Golandaz, clinical dietician at Masina Hospital.

“People interested in adding dark chocolate to their diet should keep in mind that it is high in fat and calories, so moderation is key,” said Golandaz.

According to Rukadikar, the highest levels of cocoa flavanols are found in raw cocoa. But that doesn’t mean you consume 100 per cent cocoa chocolates. “Most people generally enjoy 72 per cent to a max 85 per cent. Anything beyond can be quite an acquired taste. In fact, 100 per cent dark chocolates in countries like Spain and Mexico are used for cooking savoury dishes like in combination with meat,” said Balachandran.

According to Harvard School of Public Health

*Choose 70 per cent dark chocolate or higher to obtain the most flavanols. However, the higher the percentage of cocoa solids, the greater the bitter flavour.
*Store in a cool dry area (65-70 F) in a tightly sealed container. Do not refrigerate, which can promote the chocolate to “bloom,” a whitish coating caused by sugar rising to the surface due to excess moisture. Bloom does not affect flavour but does not look appealing.
*If stored properly, dark chocolate will last up to two years.
*Because the bitter flavour increases with a higher percentage of cocoa solids, try taking a small piece and allowing it to melt slowly in your mouth. This technique may offer a different, more pleasurable experience than quickly chewing and swallowing the chocolate.