On Monday, it was pretty inconceivable that one of the biggest women’s football tournaments ever – Euro 2022 – would be without Ballon d’Or winner Alexia Putellas.

The Spain midfielder has lit up European football with her incredible talent, skills and ability to excel in multiple positions, leading Barcelona to a second successive Champions League final and third Primera Division title in a row. She is dubbed ‘La Reina’ – the queen – by the fans.

Putellas has played in front of record-breaking crowds – numbers most footballers only dream of. A lifelong Barcelona fan, she showed her unrivalled passion for the club when she led the Nou Camp crowd on the drums after beating Real Madrid in their El Clasico meeting during the Champions League campaign.

Winners medals and individual awards – including the FIFA Best Women’s Player award and UEFA Women’s Player of the Year – continue to adorn her personal trophy cabinet.

Understandably, Putellas has been one of the faces of UEFA’s tournament build-up. Spain were already without record goalscorer Jennifer Hermoso due to a knee injury – the forward scored 51 goals in 2021, more than any female footballer in the world and was second only to Putellas for the Ballon d’Or.

Although losing Hermoso is far from ideal Spain would have taken heart from Putellas still being in the side. The onus was on her to guide Spain to victory, replicating what she has done so many times with Barcelona.

Now, history has now devastatingly repeated itself for Spain. It’s a cruel one-two punch for a team full of such promise.

“There’s a difference between losing a good player and losing the best player at the tournament,” Sky Sports News’ Anton Toloui said on the Sky Sports Women’s Euros podcast.

“You’ll hear the usual ‘it’ll bring everyone together’, but it is absolutely devastating.

“The front page of Marca said ‘we need 23 Alexias now’. Her face adorns the biggest banner at the Nou Camp, she is the franchise, as they say in the States. I’m just so disappointed that we don’t get to see her.”

Putellas had been hotly tipped as one of the players of the tournament and in the running for the Golden Boot, having finished last season as the Champions League’s top scorer with 11 goals. For many women’s football fans, it has still not sunk in that Putellas will not be lighting up English stadiums in the famous Spanish red.

Sky Sports’ Charlotte Marsh also told the podcast: “It’s going to be the biggest Euros ever. We’ve seen a record-breaking crowd [for England vs Austria] and that’s only going to be broken again as we go through the tournament.

“It’s the biggest stage women’s football had ever had in Europe and she’s not going to be part of it. That is just mind-blowing. She should be a part of it and at the centre of it too.

“There was a good quote I read on Twitter from a journalist at Marca, which was ‘you can play chess without a queen, but it’s very difficult to win’ and she is THE queen.”

Putellas tore her ACL on Tuesday during a training session ahead of Spain’s opening game against Finland at Stadium MK on Friday, three days before their campaign begins.

Losing your two best players ahead of a major tournament is almost unthinkable, let alone by just a few days. Jorge Vilda may be looking to the sky and wondering why such a situation has befallen him and his team as he scrambles for a plan B – a Spain side with no Hermoso or Putellas.

“I’m gutted for her this close to the tournament, especially after the season she has had domestically,” Sky Sports News’ Women’s Euros pundit Karen Bardsley said.

“You do not want to read too much into these things – did she get enough rest on the back of a domestic season into an international tournament and you start asking those questions.

“For me, she was definitely going to be the one to watch, I did pick Spain to go all the way to the final initially and to win it. And she was up there for Golden Boot, so this news has thrown a spanner in the works. 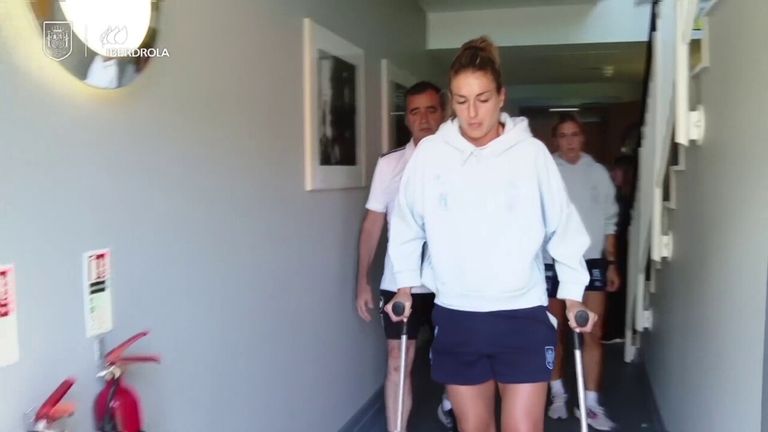 Spain have been dealt a huge blow ahead of the Women’s Euros with the news that their captain, Alexia Putellas will miss the tournament after rupturing her ACL in training

“It is a huge (blow), she was a key part of their success and a huge part of their midfield. I can’t personally attest to how far she drives the team in terms of motivation, but I imagine she is one of the leaders, so it will be difficult to replace her.

“But fortunately they have a lot of youth that hopefully will step up.”

And that is the burning question now – who can step up in Putellas’ absence?

Real Sociedad forward Amaiur Sarriegi has been called up to fill the spot. The 21-year-old already has 12 goals in as many caps, including two goals against Scotland in their World Cup Qualifier in November.

But it could be Spain’s youngest player – the versatile Claudia Pina – who becomes the focus as Vilda looks for a new playmaker. The 20-year-old had an impressive return of 14 goals in 24 Primera Liga matches for Barcelona, along with 11 assists, but is yet to score in any of her four Spain appearances.

Admittedly, she would have been down the pecking order, but Pina could now be set to be given a huge chance to prove herself at international level. Similar players in the squad are young too – Lucia Garcia is 23, Athenea del Castillo just 21.

It’s almost a free hit for these youngsters – no one is expecting them to be at Putellas’ level, but they have the chance to propel Spain into the depths of the tournament and make a name for themselves on the biggest stage.

And it would be short-sighted to completely write Spain off before they have even kicked a ball. Aitana Bonmati – still only 24 herself – Leila Ouahabi and captain Irene Paredes all bring a wealth of experience and talent. They may not have the creative attacking spark of Putellas, but it takes a team to win a tournament.

Spain aren’t out of it by any stretch of the imagination and they are far from a one-player team. But there’s no denying that life without Putellas does make their job harder.

Keep up with all the latest from Euro 2022 across Sky Sports and Sky Sports News this summer.

Coverage will be anchored by Sky Sports WSL presenter Caroline Barker, alongside Jessica Creighton and Kyle Walker. Meanwhile, Karen Carney, Sue Smith, Courtney Sweetman-Kirk and Laura Bassett will give analysis throughout the tournament.

The pundits and presenters will work from the Sky Sports Women’s Euro 2022 Mobile Presentation Bus, which will follow the Sky Sports News team around the country to the various stadiums where matches are being played.

In addition, Sky Sports’ Essential Football Podcast will be rebranded for the tournament to Sky Sports Women’s Euros Podcast from 21 June. Hosted by Charlotte Marsh and Anton Toloui, it will feature exclusive news and player interviews in addition to a strong programme line-up around the tournament.