The paramedics’ union says the ongoing impact of COVID, ramping and rising flu cases are smashing a network under siege, while the college for emergency medicine has declared “it isn’t safe”.

The nurses’ union says the health system is “on the brink of collapse”.

SA Health’s emergency department dashboard showed that at 8pm every single public hospital ED was at “code white” – the highest rating above capacity, meaning that the ED had all of its treatment rooms being used.

There were 137 patients still waiting to be seen, with 320 having commenced treatment.

The worst average wait time was at Lyell McEwin Hospital, at 216 minutes, followed by Flinders Medical Centre and Modbury Hospital both at 178 minutes. 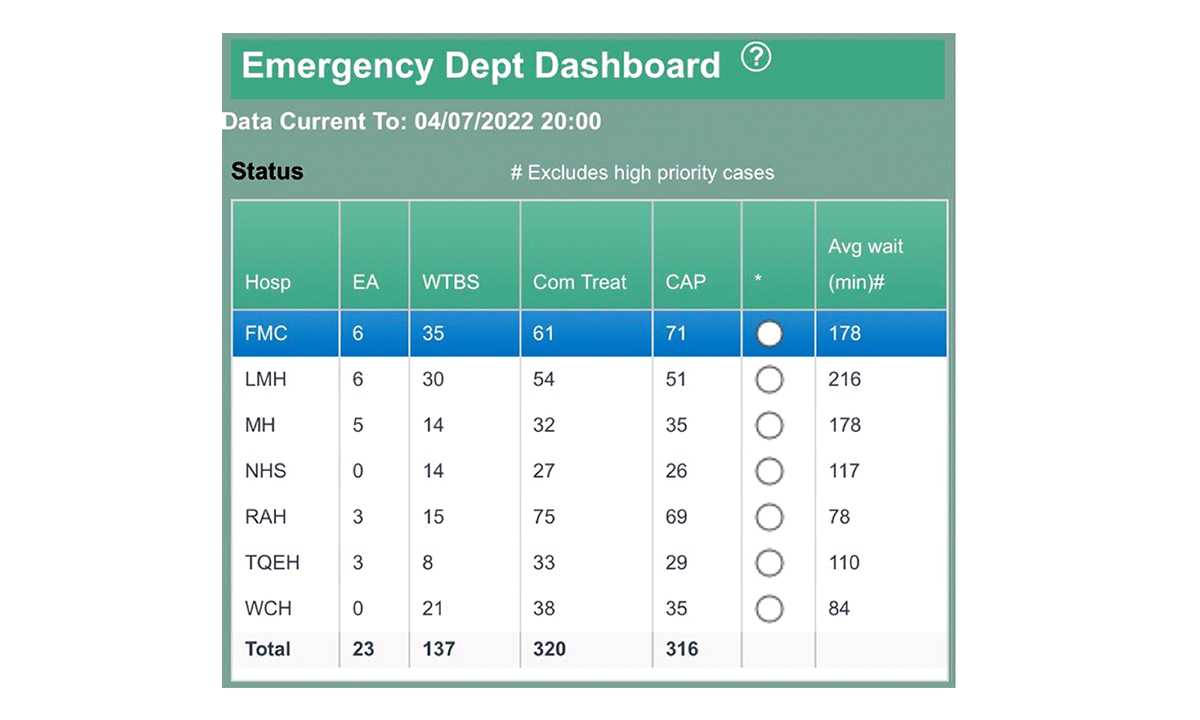 It comes as Health Minister Chris Picton prepares to hold crisis talks this afternoon with emergency doctors from the Royal Adelaide Hospital and their union, after they began industrial action yesterday over bed-block.

The Government has said it knows the system is in crisis and wants to hear from doctors about short and long-term measures to ease the pressure.

Opposition health spokesperson Ashton Hurn said “the events of last night reflect a health system that is at breaking point, and what’s incredibly concerning is that it’s going to get worse”.

“We are just weeks away from COVID numbers exploding to 6000 cases per day – but Labor has no sense of urgency in preparing our system to cope,” she told InDaily.

Thoughts are with our frontline health workers and all patients. pic.twitter.com/0zMmJn9VuQ

She said “Opstat White” levels had been declared 16 times in the month of June and again last night at 8.20pm.

“Last night’s Opstat White declaration was cited as being a result of a high number of pending Priority 2 cases, and ‘transfer of care delays’ ie ramping,” she told InDaily.

“The significant investment in Health and Ambulance resources pledged by the Labor Government can’t come soon enough,” she said.

“The AEA has long taken the position of campaigning for patient and community safety. With this in the forefront of our minds, we encourage every eligible South Australian to ensure they are up to date with their COVID booster, and receive a current flu vaccination.

“It is the unfortunate reality that those needing an emergency ambulance may be facing significant delays, and we therefore encourage people to consider alternatives if safe to do so.

“We still encourage South Australians to call 000 if they feel they need to.”

Dr Michael Edmonds, SA faculty chair of the Australasian College for Emergency Medicine told InDaily: “It is now widely understood by stakeholders across health, including the government, that the health system in South Australia is in crisis and it isn’t safe, for either patients or staff.”

“The College recognises the commitment and resolve from the clinical workforce, government, and other stakeholders to collaboratively address the systemic issues that lead to access block, ambulance ramping, emergency department overcrowding, code whites, workforce issues and poorer outcomes for patients, including avoidable deaths,” he said.

“ACEM will hold the government accountable for the delivery of crucial fixes, and continues to offer clinician engagement in developing these solutions.”

Australian Nursing and Midwifery Federation state secretary Elizabeth Dabars told InDaily “after years of inaction and neglect, the new state government has inherited a health system on the brink of collapse”.

“Despite our urging, the previous government failed to address inpatient and sub-acute capacity,” she said.

“As a result, we have significant blockages in the health system with people trapped in the ED for days and weeks, or in an acute care bed they no longer need for weeks and months.

“This takes away the ability for people who have genuine acute care needs from accessing a bed and does nothing to fix ramping.

“The previous government also did not make any genuine effort to address workforce growth, only making a last ditch effort at the end to employ more graduates nurses and midwives that they then failed to support appropriately.

“The situation we now find ourselves in is entirely predictable and one we warned the former government about.”

Dabars said the new government had committed to growth in capacity with 300-plus extra beds and investment in new staff “but the immediate shortages of people with the required skills along with capacity in beds and services mean that these new investments are not working quickly enough to impact now or in the short term”.

“Nurses and midwives have been working 18 hour shifts, working short and have been fatigued and under resourced for a long time,” she said.

InDaily has asked Picton for a response.

Media diversity is under threat in Australia – nowhere more so than in South Australia. The state needs more than one voice to guide it forward and you can help with a donation of any size to InDaily. Your contribution goes directly to helping our journalists uncover the facts. Please click below to help InDaily continue to uncover the facts.

Pacific news in brief for September 29