Christian Eriksen has agreed in principle to join Manchester United on a free transfer.

United will now finalise a three-year contract for the 30-year-old, who spent the second half of last season at Brentford.

Once that is done, Eriksen will have a medical before completing the move.

The Denmark international was mulling over offers from United and Brentford, but has decided to join up with Erik ten Hag at Old Trafford.

Eriksen worked with Ten Hag when he trained with Ajax as part of his return to football following his cardiac arrest while playing for Denmark at Euro 2020.

United were patient in their pursuit of Eriksen and put no pressure on the midfielder for a decision, as they understood his choice would be based on more than just football.

Eriksen was settled in London with his family at Brentford, but has been attracted by the prospect of working under Ten Hag and being part of United’s new era under the Dutchman.

The news of an agreement comes following a weekend in which Cristiano Ronaldo made it clear he wants to leave United following a slow start to the club’s business in the transfer window this summer. The 37-year-old subsequently failed to report for pre-season training on Monday, citing family reasons. 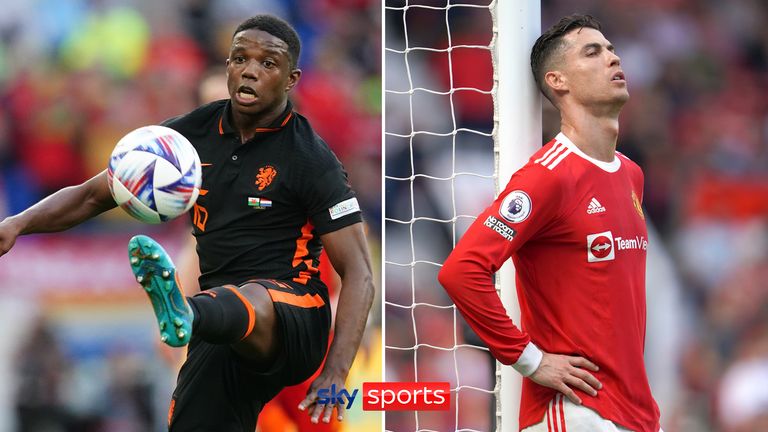 Peter Stevenson reports from Manchester United’s training ground where Tyrell Malacia has arrived to complete his medical but it appears there may be no Cristiano Ronaldo with his future at the club remaining uncertain.

Feyenoord left-back Tyrell Malacia is on the verge of becoming United’s first signing, having undergone medical checks ahead of signing a five-year deal at Old Trafford.

“Manchester United were patient when they made their offer for Christian Eriksen and his representatives.

“They didn’t rush Eriksen into a decision as they understood that the motivation was not just a footballing decision. There were other issues, family issues. Did he want to move away from London?

“All of this was contributing to the final decision that he made. Brentford had an offer on the table but Eriksen has a very good relationship with Erik ten Hag as when he was recovering from his cardiac arrest at the Euros, he trained at Ajax with Ten Hag.

“Their relationship was forged then and it looks like a deal is now coming to fruition.”

“We know the list of Manchester United transfer targets and Erik ten Hag is working his way through them – Tyrell Malacia is close while talks remain ongoing with Barcelona for Frenkie de Jong.

“There’s been question marks over whether he would move but if he stays at the Nou Camp there has been suggestions he would have to take a pay cut. He would earn significantly more at Manchester United, we’ll learn more this week about where Lisandro Martinez decides to go – United or Arsenal.

“With Eriksen, the question was whether he would stay at Brentford or if he would choose United. We believe he’s going to sign a three-year contract and it’s a great signing.

“United need some reinforcements in midfield. They need some creativity in midfield and he’s a player United wanted.”

The Portugal forward has informed the club he wants to leave this summer in order to play Champions League football.

It is understood that his absence from training on Monday was due to family reasons, with United accepting this explanation.

United’s position on Ronaldo remains that he has a year remaining on his contract and is not for sale, despite his desire to quit Old Trafford.

Manchester United are on the verge of making their first summer signing as Feyenoord left-back Tyrell Malacia finalises a move to the Premier League club.

Personal terms on a five-year contract have been agreed for the Netherlands international, who will cost United £13m.

United may now consider offers for Alex Telles, who has two years left on his deal after arriving from Porto in the summer of 2020.

The immediate future of Brandon Williams is also expected to be discussed and whether his development is best served by staying at United or going out on loan again.

Who will be on the move this summer when the transfer window opens on June 10 and closes at 11pm on September 1?