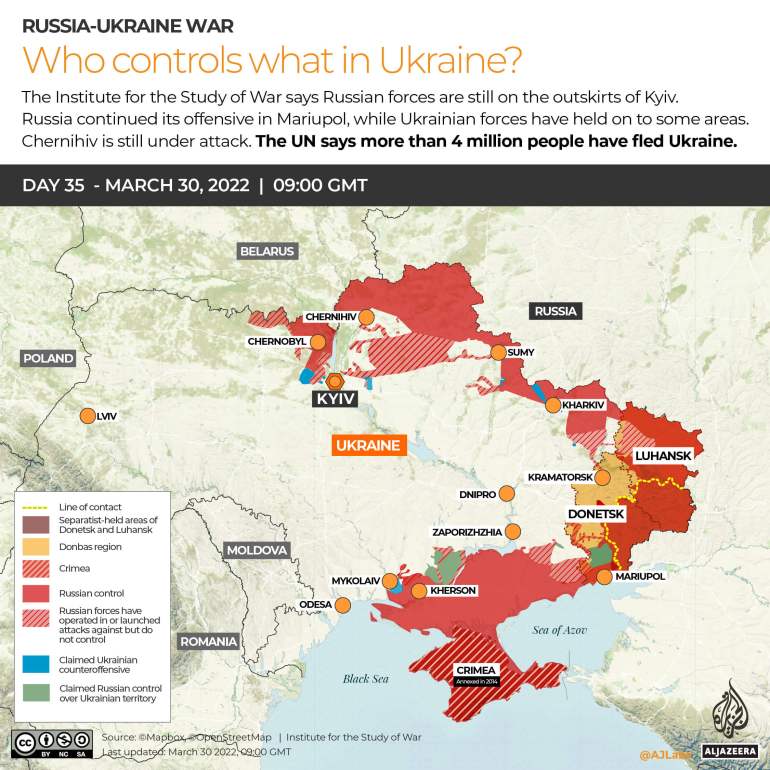 Here are all the latest updates:

The European Bank for Reconstruction and Development (EBRD) says Russia’s economy will contract by 10 percent this year while Ukraine’s gross domestic product could shrink by as much as 20 percent due to the war between the two countries.

Before the Russian invasion of Ukraine, the London-based bank had predicted that the Russian economy would expand by three percent and that Ukrainian GDP would grow by 3.5 percent this year.

Indian authorities are actively considering dedicated payment mechanisms for trade with Russia to enable existing trade obligations in the wake of sanctions imposed on the Kremlin over its invasion of Ukraine.

Experts say a payment mechanism – in local currencies – could pave the way for cheaper oil imports to meet India’s energy demands and open up opportunities for Indian manufacturers of agricultural machinery, medicine, furniture and bathroom fittings, among other goods, who are looking for new markets.

Read more on this topic from Srijonee Bhattacharjee in Mumbai, India.

New Zealand says member countries of the International Energy Agency (IEA) will meet on Friday at 1200 GMT (1400 Paris time) to decide on a collective oil release.

“The amount of the potential collective release has not been decided,” a spokesperson for energy minister Megan Woods said.

The IEA is an inter-governmental body that is tasked with maintaining the stability of global oil supplies.

Dmitry Medvedev, the former president of Russia, has said that Western efforts to bind Russia have failed as Moscow was ready for sanctions.

“Of course, there are real difficulties, which Russia has to cope with, as we are still being isolated from global value-added chains, the international division of labor, facing growing unemployment and being sent into an economic turmoil,” he was quoted as saying by the TASS news agency.

“Nevertheless, the efforts to bound Russia fail as we were ready for such predictable attacks,” he said, citing Moscow’s decision to call for payments in roubles for its gas exports.

“While our opponents continue their fruitless work, the world is gradually moving towards a new logic of global economic relations, and to a revised financial system,” he added.

Global restrictions on exports to Russia have shut down a car maker, halted work on tanks and cut a Russian computer maker’s access to circuits used in communications equipment, a US official has said.

“Thirty-three countries have joined together with one export controls strategy,” said Thea Kendler, assistant secretary for export administration at the Commerce Department.

“Necessity brought together this unprecedented collaboration on export controls and other measures that are having a meaningful impact on Putin’s war.”

US planning to tap oil reserve to control gas prices

US President Joe Biden is preparing to order the release of up to 1 million barrels of oil per day from the nation’s strategic petroleum reserve, according to The Associated Press.

Citing two people familiar with the decision, the agency said the move is part of a bid to control energy prices that have spiked as the US and allies have imposed steep sanctions on Russia over its invasion of Ukraine

The announcement could come as soon as Thursday, when the White House says Biden is planning to deliver remarks on his administration’s plans to combat rising gas prices.

Ukrainian officials have accused Russian forces of launching a missile attack on a fuel depot near the city of Dnipro.

“A rocket hit an oil depot in Dnipro,” said Valentyn Reznichenko, the governor of the Dnipropetrovsk region. “[It hit] one of the plants in Novomoskovsk.”

No casualties have been reported yet.

Zelenskyy has recalled Ukraine’s ambassadors to Georgia and Morocco, suggesting they had not done enough to persuade those countries to support Ukraine and punish Russia for the invasion.

“With all due respect, if there won’t be weapons, won’t be sanctions, won’t be restrictions for Russian business, then please look for other work,” Zelenskyy said in his nighttime video address. “I am waiting for concrete results in the coming days from the work of our representatives in Latin America, the Middle East, Southeast Asia and Africa.”

He said “the diplomatic front is one of the key fronts” in Ukraine’s battle to win the war against Russia.

EU agrees with US assessment on Putin’s advisers: Report

A senior European diplomat has told Reuters that a US assessment on Putin’s advisers misleading him about the Ukraine war is in line with European thinking.

“Putin thought things were going better than they were. That’s the problem with surrounding yourself with ‘yes men’ or only sitting with them at the end of a very long table,” the diplomat said.

Reuters also cited two European diplomats saying that Russian conscripts were told they were taking part in military exercises, but had to sign a document before the invasion that extended their duties.

“They were misled, badly trained and then arrived to find old Ukrainian women who looked like their grandmothers yelling at them to go home,” one of the diplomats told the news agency.

Ukraine’s president has thanked the White House for pledging an additional $500m in direct aid, but said he was open with Biden about Ukraine needing more to resist the Russian invasion.

“If we really are fighting for freedom and in defense of democracy together, then we have a right to demand help in this difficult turning point,” Zelenskyy said in his nighttime video address to the nation. “Tanks, aircraft, artillery systems. Freedom should be armed no worse than tyranny.”

Zelenskyy said the negotiations with Russia were continuing but for now, they were only “words without specifics”.

Russia and Ukraine will resume peace talks online on April 1, a senior Ukrainian official has said.

Ukrainian negotiator David Arakhamia said in an online post that Ukraine had proposed a meeting between the countries’ leaders, but Russia responded by saying more work needed to be done on a draft treaty. The latest round of negotiations was held in Turkey this week.

The head of the United Kingdom’s spy agency has said new intelligence shows that some Russian soldiers in Ukraine had refused to carry out orders.

“We’ve seen Russian soldiers – short of weapons and morale – refusing to carry out orders, sabotaging their own equipment and even accidentally shooting down their own aircraft,” Fleming said in a speech in Canberra at the Australian National University, according to a transcript of his remarks.

British Foreign Secretary Liz Truss will visit India on Thursday as part of a “wider diplomatic push” on the war in Ukraine, her office has said, in a trip that coincides with her Russian counterpart Sergey Lavrov travelling to the country.

India has frustrated Western allies by refusing to condemn Russia’s invasion of Ukraine and by buying Russian commodities at a discount.

The United Kingdom’s foreign ministry said Truss would underline the “importance of democracies working together to deter aggressors”, adding that she wanted a closer relationship with India to boost security and jobs in both countries.

Ukraine’s President Volodymyr Zelenskyy has said he does not trust Russian promises to scale back military activity and that the Ukrainian military was getting ready for further fighting in the country’s east.

“We don’t believe anyone, not a single beautiful phrase,” Zelenskyy said in a video address to the nation, adding that Russian troops were regrouping to strike the eastern Donbas region.

“We will not give anything away. We will fight for every metre of our territory.”

Michael Bociurkiw, a global affairs analyst, says evacuations and other humanitarian interventions in Ukraine are “very difficult” because Russian promises cannot be believed.

Bociurkiw, a former spokesman for the Organization for Security and Co-operation in Europe (OSCE) in Ukraine, was speaking after Russia announced it would implement a ceasefire on Thursday to allow for civilian evacuations from the Ukrainian port city of Mariupol.

“Where we are right now in Ukraine is that the Russian promises have no validity whatsoever because they’ve been violated so many times,” he said.

“So anyone from the Red Cross or the Ukrainian government … has a very difficult time planning any type of intervention, evacuation, [or] humanitarian delivery because promises cannot be believed from the Russian side.”

The Russian defence ministry has announced a local ceasefire to allow civilians to be evacuated from Ukraine’s besieged port city of Mariupol.

A humanitarian corridor from Mariupol to Zaporizhzhia, via the Russian-controlled port of Berdiansk, would be opened from 10am (07:00 GMT) on Thursday, the ministry said.

“For this humanitarian operation to succeed, we propose to carry it out with the direct participation of the UN High Commissioner for Refugees [UNHCR] and the International Committee of the Red Cross [ICRC],” the ministry statement said.

The Russian ministry asked Kyiv to guarantee “unconditional respect” for the ceasefire through written notification to the Russian side, the UNHCR and ICRC before 6am (03:00 GMT) on Thursday.

Sanctions should remain until all Russian troops withdraw: UK’s Johnson

Boris Johnson, the prime minister of the United Kingdom, says Western nations should not lift sanctions on Russia until all of Moscow’s troops leave Ukraine.

“I certainly don’t think that you could expect the G7 to lift sanctions simply because there’s been a ceasefire in Ukraine, and that again goes straight into Putin’s playbook,” Johnson said.

“In my view, we should continue to intensify sanctions with a rolling programme until every single one of his troops is out of Ukraine.”

The White House communications director has described Russia’s invasion of Ukraine as a “strategic blunder”.

“It is increasingly clear that Putin’s war has been a strategic blunder that has left Russia weaker over the long term and increasingly isolated on the world stage,” Kate Bedingfield told reporters during a news briefing.

Russia repositioning less than 20 percent of its forces around Kyiv: Pentagon

Russia has started to reposition less than 20 percent of its forces around Kyiv, the Pentagon has said, cautioning that Moscow was expected to refit and resupply them for redeployment, but not bring the forces home.

John Kirby, Pentagon spokesperson, said some of the Russian forces may have already moved into Belarus, as opposed to their home garrisons.

Kirby also said during a news briefing that Russian private military company Wagner Group had deployed about 1,000 contractors into Ukraine’s Donbas region, which Moscow has declared a priority in its offensive.

What will happen if Russia turns off Germany’s gas supply?

The German government has triggered the first stage of an emergency plan for natural gas supplies and urged consumers to save energy in the face of growing concerns that sanctions-hit Russia could stop deliveries unless it is paid in roubles.

Putin announced last week his country would only accept payments in roubles for natural gas deliveries to “unfriendly countries” – those that have imposed sanctions over its invasion of Ukraine, including all European Union members.

Russian President Vladimir Putin has been misled by his advisers about the Russian military’s performance in Ukraine, the White House has said.

“We have information that Putin felt misled by the Russian military, which has resulted in persistent tension between Putin and his military leadership,” Kate Bedingfield, White House communications director, told reporters during a news briefing.

“We believe that Putin is being misinformed by his advisers about how badly the Russian military is performing and how the Russian economy has been crippled by sanctions because his senior advisers are too afraid to tell him the truth.”

Welcome to Al Jazeera’s continuing coverage of the war in Ukraine.

Read all the updates from Wednesday, March 30 here.

No public health without planetary health