Barcelona’s victory over Real Madrid in the Women’s Champions League quarter-finals on Wednesday was watched by 91,553 fans at the Nou Camp, making it a landmark moment for women’s football in Europe.

The hosts came from behind to beat their bitter rivals 5-2 to reach the semi-finals with an 8-3 aggregate win, setting up a last-four meeting with either Arsenal or Wolfsburg.

The previous highest turnout for a women’s club game came in 2019 when 60,739 people saw Barca beat Atletico Madrid 2-0 at Wanda Metropolitano. The previous Champions League record was 50,212 for a game between Lyon and Frankfurt in Munich in 2012.

It was also the first time Barcelona’s women’s team played a match at the Nou Camp in front of fans. They had played at the stadium before but behind closed doors because of restrictions due to the coronavirus pandemic. 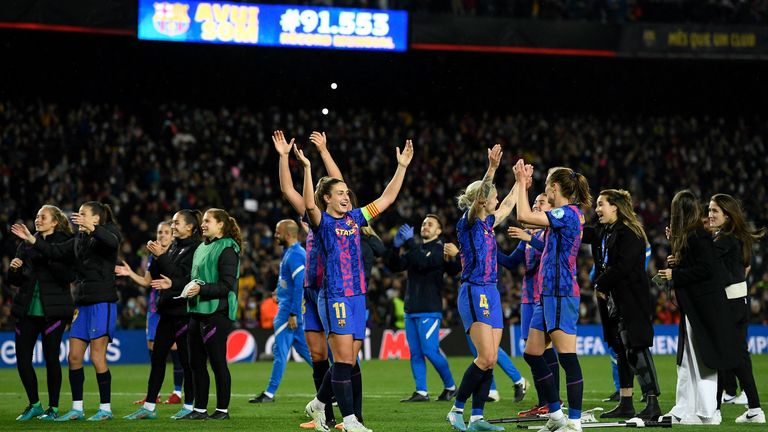 Karen Carney believes women’s football has come so far as over 90,000 watched Barcelona beat Real Madrid at the Nou Camp in the Champions League

“It was unbelievable. I actually took my ex-player pundit hat off and just watched the game, I was shouting at the TV. I couldn’t believe 91,000 people were there for a women’s game.

“Credit to Barcelona and everyone involved to get the fans in there, to make it happen and put on such a great show and a great spectacle, leading the way in women’s football.

“At the end, Alexia Putellas was banging the drum, singing songs with the fans and the rest of the team. I was a bit emotional looking back on it and I’m very proud.

“For a long time, women’s football has been after this and now to have done it, they are leading the way and every other team should now follow them. It was amazing.

“I’ve always said women’s football should be a part of and not apart from. You can see there is a space to generate big crowds and attendances. If it’s marketed right like we saw last night and credit to Barcelona, if you sell it as an El Clasico and in the right way, you will get fans because there’s an audience.

“That’s exactly what we should continue to do here with women’s football in the UK because there is an audience and people who want to watch it, it’s just got to be sold in the right way and the product will continue to sell itself after that.”

Toloui: Women’s football can be as raucous, passionate and tribal as any other sport

“The match at Camp Nou was more than a spectacle, it was a statement. It was proof women’s football can be as loud, raucous, passionate and tribal as any other sport on the planet and should be on the grandest stage of all.

“Many of us have been to women’s games where big crowds have turned up but the atmosphere has been – for the want of a better word – nice.

“This was different. The grand old stadium became a cauldron of noise as 91,000 plus loudly cheered on the best team in Europe in a highly partisan manner.

“On Wednesday night, the city of Barcelona came out with the same zeal, love and noisy affection afforded to the likes of Cryuff, Maradona and Messi in the past – only this time the adoration was for their latest Ballon d’Or winner, Putellas.

“I don’t have the words to describe it. It was super magical. The game ended and the fans didn’t want to leave. It was incredible.”

“Thousands of fans were wearing “Alexia 11” jerseys. Her face is plastered all over the side of Nou Camp and the biggest cheer of the night was when she scored her goal and bowed to the fans. To see the mass celebration of a homegrown superstar was wonderful.

“And then there’s the statement sent to the rest of the ‘big clubs’ in Europe. Barcelona have aligned their professional and academy set-ups to play the same style and have access to the same facilities regardless of gender. They’ve opened the doors of La Masia this season to the next wave of female talent to reside alongside boys of a similar age and potential.

“And when they staged such a big game at one of the world’s most famous arenas, they promoted it so heavily it sold out in three days. Chatting to fans in the city over the last few days, you don’t support Barcelona and not have to prefer the men’s side or the women’s – you support both with equal ferocity.

“How many supporters over here can say the same thing?”

Marsh: People will support teams regardless of gender

“This game felt like a long time coming. Not just in terms of the attendance, but it had been billed as a record-breaker for quite some time now. Promotion from Barcelona billing this huge Champions League quarter-final as the game to watch, the game to be at and not to miss out on started as soon as the draw was made.

“It paid off too thanks to some shrewd and relentless marketing of what was, quite frankly, the biggest women’s football match in Europe so far this season.

“And that’s one of the keys to this week’s huge success – promotion. Telling people the game is happening and encouraging them to attend. It’s something other clubs can learn from – especially in the UK – and it’s proven effective. If the football is there to watch, no matter of gender, people will come out and support it.

“The crowd reaction too showed that it was far more than a stroll down to the Nou Camp to watch a spot of women’s football as a placeholder for the men’s team – it meant far more than that. Any El Clasico does.

“The Barcelona team bus could barely edge its way through the throngs of supporters, all waving flags and wearing those iconic team colours. A brilliant occasion for the team on that bus, and very much the opposite if you arrived in the Real Madrid coach. 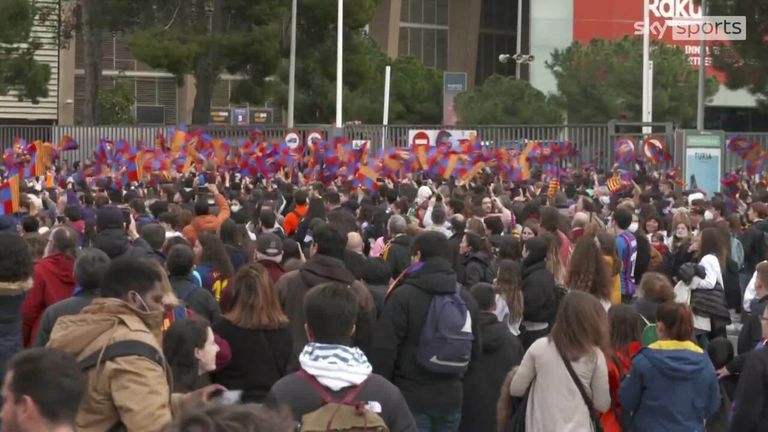 “The post-match scenes were equally as awe-inspiring. Women’s football has a reputation for a close relationship with their fans, and Putellas leading the celebrations on the drums and taking pictures pitchside with fans reflected that perfectly.

“Barcelona men’s manager Xavi Hernandez and his former team-mate Carles Puyol were both in the stands to watch the historic match and the game certainly delivered on goals and excitement.

“There has been plenty of focus on Barcelona, but let’s not forget, Real Madrid’s women’s team are still in their infancy. Beginning as CD Tacon, their integration into the club began in 2019 and were only renamed as ‘Real Madrid’ in July 2020. With the power of such a name behind them, it is surely only a matter of time until they become strong enough to challenge Barcelona’s stronghold over women’s football in Spain.

“Both teams contributed to an event which is rightly being celebrated as a historic and important landmark for women’s football. Here’s hoping it is replicated and continued across Europe as the game continues to break barriers.”

“I thought it was amazing. It’s an incredible tally of supporters for one game. Rightly so, it’s a record and it’ll do very well to be broken – unless it was to be played in the same stadium [Camp Nou] again.

“I was talking previously around the availability of the women’s game to be viewed now. Before I took this role just over 18 months ago, you’d really struggle to find a game on any format.

“To jump from that to having games live on Sky, having games on the BBC – it’s more accessible now. I think it’s amazing. Yesterday was a great day for women’s football. Moving in the right direction.”