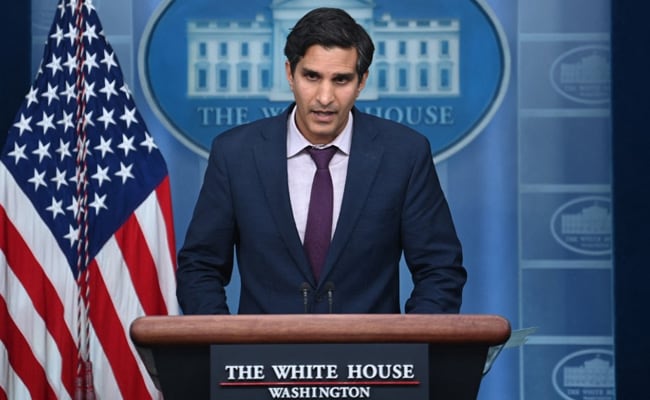 Top Indian-American US adviser and a key architect of Washington’s punitive economic sanctions against Moscow, Daleep Singh, will arrive in India for a 2-day visit today to discuss the “consequences” of Russia’s “unjustified war” against Ukraine and the development of an Indo-Pacific Economic Framework, the White House has announced.

Mr Singh’s trip coincides with the visit of Russian Foreign Minister Sergey Lavrov who is likely to arrive in India either on Thursday evening or Friday morning after concluding a two-day visit to China, reported news agency Press Trust of India.

Deputy National Security Adviser for International Economics Daleep Singh will be in New Delhi on March 30 and 31, the White House said on Tuesday.

“(Daleep) Singh will consult closely with counterparts on the consequences of Russia’s unjustified war against Ukraine and mitigating its impact on the global economy,” said Emily Horne, spokesperson of the National Security Council of the White House.

Ms Horne said the top official will also discuss priorities of the Biden administration, including the promotion of high-quality infrastructure through Build Back Better World and the development of an Indo-Pacific Economic Framework.

In New Delhi, Mr Singh will continue the US administration’s ongoing consultations with India, and advance a range of issues in the US-India economic relationship and strategic partnership.

He will meet Indian officials to deepen cooperation to promote inclusive economic growth and prosperity, and a free and open Indo-Pacific, Ms Horne said.

The preparations for the upcoming ‘2+2’ foreign and defence ministerial dialogue in Washington next month are also likely to figure during Mr Singh’s visit. The dialogue is likely to take place around April 11.

The Ukraine crisis is likely to be the main focus of the US official’s visit to India, people familiar with the development said on Tuesday in New Delhi.

Mr Singh, 46, is the great-grandson of Dalip Singh Saund, the first Asian-American elected to the Congress. He has a Master of Business Administration and Master of Public Administration in international economics from the Massachusetts Institute of Technology and the Harvard Kennedy School.

Mr Singh is said to be the architect of economic sanctions against Russia under the Biden administration. The sanctions, so far, have had a punitive impact on the Russian economy.

Mr Singh’s planned trip to India comes in the midst of a flurry of high-profile visits to the country which included British Foreign Secretary Liz Truss and German Foreign and Security Policy Adviser Jens Plotner.

While Ms Truss will visit India on March 31, Mr Plotner will pay a day-long trip to New Delhi on Wednesday.

Unlike many other leading powers, India has not yet criticised Russia for its invasion of Ukraine and it abstained from the votes at the UN platforms in condemning the Russian aggression.

However, last Thursday, India abstained on a resolution pushed by Russia on the humanitarian crisis in Ukraine, which was seen as reflective of its neutral position on the conflict.

India has been pressing for the resolution of the crisis through diplomacy and dialogue.

Last week, External Affairs Minister S Jaishankar said in Parliament that India’s position on the Ukraine conflict has been “steadfast and consistent” and that it has been seeking immediate cessation of violence.