Barcelona’s attempt to sign Liverpool’s Egypt forward Mohamed Salah, 29, is set to be thwarted by their inability to comply with La Liga’s financial rules. (Mirror)

Leeds United have placed a £67m (80m euros) price tag on Brazil winger Raphinha, 25, with Barcelona only willing to pay about half that figure. (Mirror)

Leeds say the only release clause in Raphinha’s contract is one which allows him to leave if the Whites are relegated from the Premier League. (The Athletic)

Manchester United, Liverpool and Newcastle are interested in signing Portugal midfielder Otavio, 27, from Porto this summer. (A Bola – in Portuguese)

Arsenal and Atletico Madrid are vying for the signature of Argentina striker Lautaro Martinez, 24, who Inter Milan will sell if they receive an offer of £58m this summer. (Calciomercato – in Italian)

Striker Paulo Dybala wants to join Atletico Madrid this summer when his Juventus contract expires – and although Inter Milan are also interested in the 28-year-old, they can only afford him if they sell fellow Argentine Martinez. (Mundo Deportivo – in Spanish)

Liverpool have reached an agreement in principle to sign former England Under-18 international Fabio Carvalho from Fulham, after almost sealing a deal for the attacking midfielder, 19, during the January transfer window. (Football Insider)

Arsenal are preparing their opening proposal to extend the contract of England winger Bukayo Saka, 20, at the end of the season. (Fabrizio Romano)

Ivory Coast winger Nicolas Pepe, 26, has hinted at a summer exit from Arsenal, three years after his club-record £72m move from Lille. (Sun)

Leicester City have been linked with Club Bruges forward Charles de Ketelaere. The 21-year-old has scored 17 goals in 41 games this season and won his fifth Belgium cap in last weekend’s friendly against the Republic of Ireland. (Leicester Mercury)

Napoli are hopeful of preventing Senegal centre-back Kalidou Koulibaly from leaving on a free transfer by offering the 30-year-old a new long-term contract. (Calciomercato – in Italian)

Barcelona are set to rival Real Madrid in a bid to sign Arsenal and Scotland full-back Kieran Tierney, 24. (Sunday Post, via Football.London)

Leeds are monitoring the progress of Manchester United’s 21-year-old midfielder James Garner, who has impressed on loan at Nottingham Forest this season. (Mail)

Barcelona have prioritised the signing of Chelsea and Spain defender Cesar Azpilicueta, 32, this summer. (Mundo Deportivo – in Spanish) 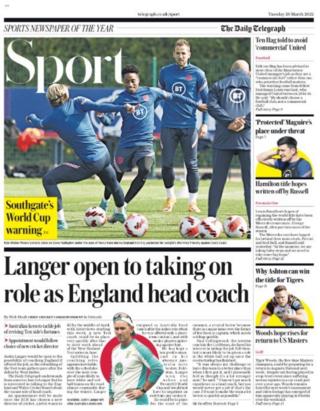 Back page of Tuesday’s Telegraph