Wembley Stadium is poised to host a capacity crowd for this summer’s UEFA Women’s Euro 2022 final, with England’s group stage fixture against Northern Ireland at St Mary’s also a sell-out.

The event’s opening match between England and Austria on July 6th is taking place at Old Trafford with UEFA revealing over 350,000 tournament tickets have already been snapped up.

That total means this summer’s tournament – which has been postponed by 12 months due to the pandemic – is set to achieve unprecedented attendances, already surpassing the total number of tickets sold for 2017’s edition, which was hosted by reigning champions Netherlands.

Over 700,000 tickets have been made available across the 10 venues in nine host cities for the tournament which runs from July 6 to July 31, with the aim of Wembley’s grand finale surpassing the current European record for a women’s game of 80,203 – set at London 2012.

UEFA’s chief of women’s football, Nadine Kessler, who was also a Women’s Euro winner in 2013 with Germany, said: “The countdown to UEFA Women’s Euro 2022 in England has already begun and today marks just 100 days to go!

“This summer is going to be a game-changer for European women’s football and we can’t wait to showcase what will be a record-breaking tournament. It’s going to be bigger and better than ever before, so get ready, get excited and get your ticket now to show your support for your country in England this July.”

Fara Williams: ‘Their best chance to bring it home’

Fara Williams, England’s most capped player of all time, is backing the host nation to produce a tournament to remember this summer, both on and off the pitch.

The Lionesses were beaten by eventual champions the Netherlands at Euro 2017, and Williams believes that the home advantage can play a vital role in boosting England’s chances this time around.

“I think today brings it to life – 100 days until the tournament kicks off and it’s here in England,” she told Sky Sports News’ Gary Cotterill.

“The tickets go on [general] sale today and we’re hoping to break some records this summer. A home Euros, to follow on from the men’s [tournament] last year.” 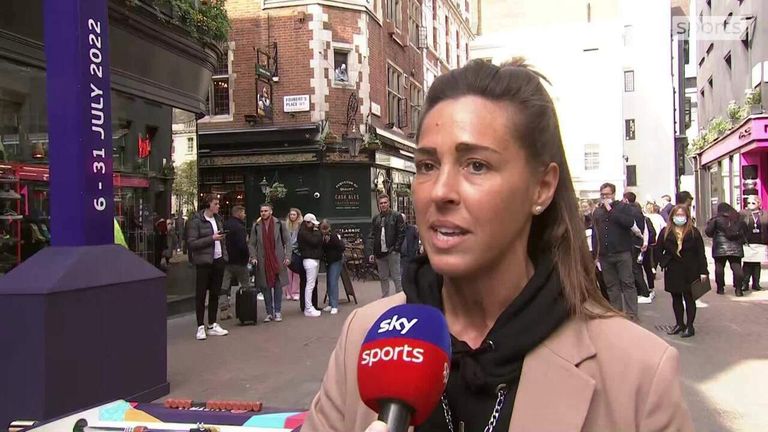 England’s most capped player Fara Williams believes that home advantage will give England a huge chance of winning Euro 2022.

Speaking about England’s prospects, as they enter their first major tournament under the stewardship of head coach Sarina Wiegman, the former midfielder added: “They have got a fantastic squad of players. They have got a manager now who has got hold of the trophy so hopefully she can bring it back with her.

“The blend within the squad, in terms of the youth and experience they’ve got, I genuinely believe it’s their best chance to bring it home.

“With the genuine support of the women’s game, the way it is now, I think they have a fantastic chance. We’re going into this tournament as one of the favourites.”

Group A: England vs Austria – kick off 8pm, Old Trafford

Group B: Spain vs Finland – kick off 5pm, Stadium MK

Group B: Denmark vs Finland – kick off 5pm, Stadium MK

Group A: Austria vs Norway – kick off 8pm, Brighton and Hove Community Stadium

Group B: Finland vs Germany – kick off 8pm, Stadium MK

Paul Coll back on top of squash world rankings