USA celebrated World Cup qualification a game too early after beating Panama 5-1, with players unfurling a ‘Qualified’ banner in front of supporters despite their place at Qatar 2022 not yet being official.

Chelsea midfielder Christian Pulisic scored a hat-trick as USA romped to victory while Mexico needed a 70th-minute goal from Edson Alvarez to win 1-0 and avoid a humiliating draw with winless Honduras.

The US team are on the verge of confirming their place in the World Cup but they still face one final qualifier against Costa Rica on Wednesday.

A loss of six goals or more would send USA into a World Cup play-off, most likely against New Zealand. While such a defeat seems unlikely, Pulisic insisted the banner was an honest mistake and not a sign his team are taking anything for granted.

“The guys didn’t know at all what it said. It was just handed to them,” he explained. “Once we realised – there’s no need to show that off because we still have a job to do.

“We honestly approach it like any other game. We’re going to prepare exactly the same as we would if we needed a win.” 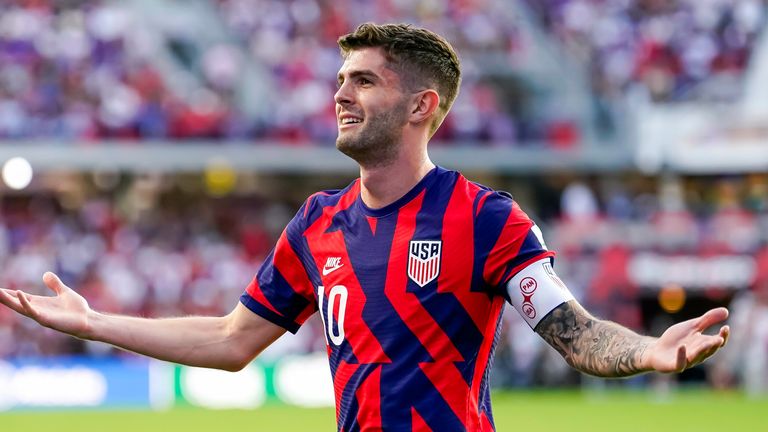 Canada qualified for the World Cup finals for just the second time, beating Jamaica 4-0 to book their ticket to Qatar and end 36 years of failure and heartache.

While Canada celebrated, Mexico and the United States will have to wait to learn their fate despite picking up wins along with Costa Rica, who also kept their Qatar hopes alive.

The victory for Canada puts the leaders on 28 points in the CONCACAF qualifying group, three points ahead of the United States and Mexico, with Costa Rica, who beat El Salvador 2-1, a further three points back.

The top three teams earn automatic places in November’s World Cup with the fourth-place finisher facing an Oceania team in an intercontinental playoff for another berth.

Mexico will host El Salvador on Wednesday, the United States travel to San Jose to take on Costa Rica and Canada wrap up their campaign against Panama. Both Mexico and the United States require only a draw to seal an automatic berth.

After failing to clinch a finals spot with a 1-0 away loss to Costa Rica on Thursday, Canada returned home with renewed purpose and a chance to complete the job in front of a frenzied, red-clad, flag-waving, sold-out crowd of nearly 30,000 at BMO Field.

“I’m just so pleased we didn’t win in Costa Rica,” said Canada coach John Herdman. “This is how it was meant to be, I know why the football gods wouldn’t let us score, it was for tonight.

“We just qualified for the World Cup, this is a legit football country.” 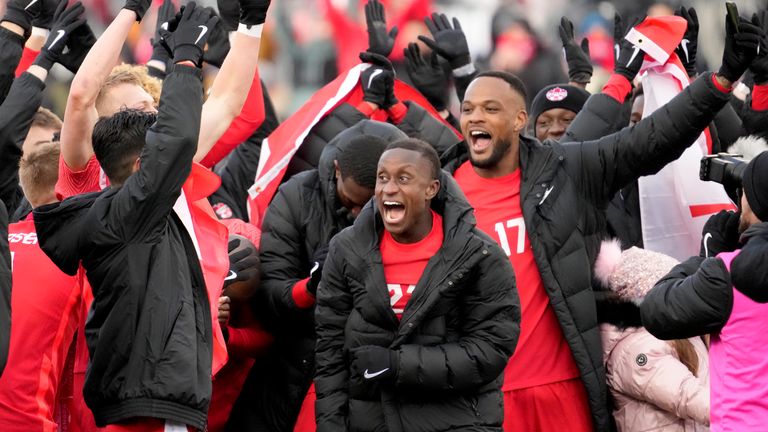 There would be no blown second opportunity as Cyle Larin and Tajon Buchanan scored in the first half and Junior Hoilett added another after the break with Adrian Mariappa’s own goal rounding off the scoring.

Canada will play at the World Cup for the first time since 1986 in Mexico, where they lost all three games and failed to score a goal.

“I think this country never believed in us because we’ve given them nothing to believe in,” said Herdman. “They believe now.

“This is the time for everyone to get behind football and unite because we can be a powerhouse.”

It was a warm welcome home on a biting cold afternoon, making it the classic Canadian stage to take on a Jamaican side anchored near the bottom of the eight-team group in seventh, with one win and no hope of getting to Qatar.

There was a time during their 36-year quest to return to a World Cup finals that playing at home was no different than away for Canada, with as many fans supporting the visitors as the home side.

But there were no split allegiances on Sunday in a lopsided contest Canada dominated from start to finish.

Who’s in the European qualifying play-offs?

While England have sealed automatic qualification by virtue of topping their group, Scotland, Wales and Cristiano Ronaldo’s Portugal must go through the play-offs, from which three more teams will advance in March.

Portugal will face North Macedonia in Path C after Italy crashed out in the semi-finals while Sweden will take on Poland, who were given a bye in their semi-final against Russia.

When is the draw?

By the end of March, we will know 28 of the 32 participants at the first winter World Cup. The final three places will be decided in the intercontinental playoffs in June as well as the final European playoff final which has been delayed due to the Ukraine-Russia crisis.

The draw for the tournament takes place on Friday 1 April 2022, at the DECC venue in Doha, Qatar at circa 5pm BST.

What is the format of the draw?

The 32 nations involved in the 2022 World Cup will be drawn into eight groups of four.

Host nation Qatar will be in position one of Group A. The other nations will be split into four pots based on FIFA rankings with the top-rated teams joining Qatar in pot one.