Barcelona have joined Liverpool, Manchester City and Bayern Munich in the race to sign Leeds’ Brazil winger Raphinha, 25, valued at £60m by his club. (Mirror)

Liverpool striker Divock Origi, 26, is in talks with Serie A rivals AC Milan and Inter Milan over a potential free transfer in the summer. (90min)

Manchester City are among a number of Premier League clubs monitoring Crystal Palace left-back Tyrick Mitchell, the 22-year-old recently called up to the England squad for the first time. (Sun)

Roma would not sell English striker Tammy Abraham, 24, for less than £100m this summer, with Manchester United and Arsenal both believed to be interested. (Mirror)

Chelsea defender Marcos Alonso, 31, says he would “love” to play in La Liga again. The Spaniard made just one league appearance for Real Madrid after coming through their youth system. (AS – in Spanish)

Chelsea captain Cesar Azpilicueta, 32, is torn between signing a new one-year contract with the Blues or accepting a one-year offer from Barcelona. (Express)

Germany international Antonio Rudiger, 29, could be the third Chelsea defender to leave Stamford Bridge as he is out of contract in the summer and has been offered a deal by Juventus. (Sky Sports)

West Ham could make another move for Benfica and Uruguay striker Darwin Nunez, after having a club-record £50m bid for the 22-year-old rejected in January. (Standard)

Leeds are interested in signing English winger Ryan Kent from Rangers, with the 25-year-old having a £20m release clause. (Football Insider)

Arsenal and Tottenham will need to pay £20m to sign 21-year-old Middlesbrough full-back Djed Spence, who is impressing on loan at Nottingham Forest. (Express)

Benfica and Sporting Lisbon are considering a move for Barcelona winger Francisco Trincao, should the on-loan 22-year-old not join Wolves permanently for £25m. (Record – in Portuguese) 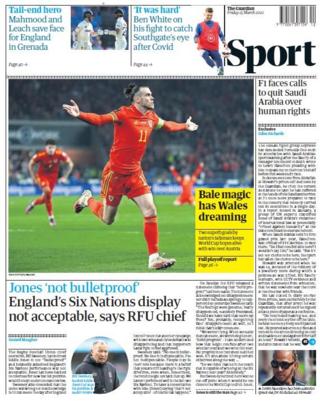