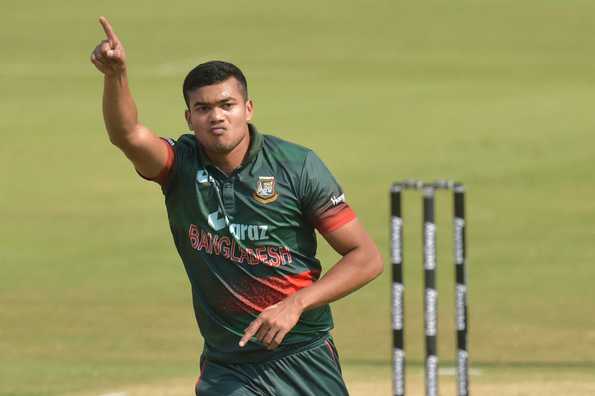 Incidentally, Bangladesh Cricket Board decided not to give No-Objection letter to Taskin in the midst of the ODI series against South Africa © Getty

Bangladesh pace bowler Mustafizur Rahman pointed out that his pace colleague, Taskin Ahmed, is currently his country’s best bowler and plays across formats. Hence, he had to forgo his chances of playing in the IPL 2022.

Incidentally, Bangladesh Cricket Board decided not to give No-Objection certificate to Taskin in the midst of the ODI series against South Africa after IPL franchise Lucknow Super Giants contacted the board in order to rope him for the tournament as Mark Wood’s replacement.

Taskin played a big part behind Bangladesh’s maiden ODI series win in South Africa by picking up a five-for in the final game of the rubber and seemed to be enjoying his role as the pace spearhead.

He is also expected to be a crucial fixture for tourists during the two-match Test series against South Africa, scheduled to begin in Durban from March 31.

”Our team will play games (Test series against South Africa) and Taskin is our best bowler at the moment. So apart from giving him consolation, I don’t have anything else to do (for missing the IPL),” Mustafizur told reporters before leaving South Africa to join Delhi Capitals in the IPL.

The left-arm pace bowler added that he is well aware that all eyes will be fixed on him as he is the only Bangladeshi player in the IPL after seasoned campaigner Shakib was not picked by any franchise in the mega auction of IPL.

”Earlier, Bangladeshi people were divided by two groups during the IPL, as me and Shakib bhai used to feature there but this time round all eyes will be fixed on me because Shakib is available across formats (for the national team). And that is why he is not picked in the IPL,” said Mustafizur, who had earlier requested the board not to consider him for red-ball cricket as he wants to focus on white-ball game.

Mustafizur added that he feels Delhi Capitals can go a long way if some of their squad members click in the tournament.

”There is no small or big team in T20 cricket and if two to three cricketers plays well, any team can go into the final. I always want to do well, but in order to do well, you need to find your rhythm and if I can get that, my focus will be to continue with it.”