Ministers will on Tuesday pave the way to compensate the 555 ‘forgotten victims’ of what has been dubbed Britain’s biggest miscarriage of justice.

Sky News has learnt that the Treasury will announce that it intends to facilitate full financial remediation for the group of sub-postmasters who found their original settlement far outweighed by vast legal fees.

The announcement will mark an important milestone in the group’s long fight for justice, which has resulted in a full public inquiry being launched into the affair. 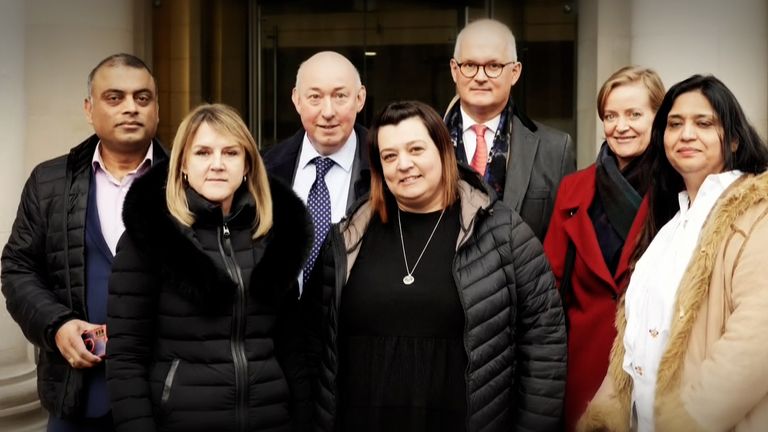 Now 72 people have had their convictions overturned, but they live with the effects of their experience everyday

Sources said that the 555 who settled with the Post Office in 2019 were expected to receive “substantial” payouts funded by the government, although Tuesday’s statement is not likely to include detailed figures.

Most of the £57.75m awarded to the 555 sub-postmasters was swallowed by Therium, the group which funded the litigation.

The government and Post Office had described the sum as a “full and final” settlement, but the outcome sparked fury among those affected, MPs and campaigners.

One insider said the acknowledgement from the Treasury that funding would be made available to the 555 was welcome but long overdue. Julian Wilson was wrongly accused of theft and took a plea deal in 2008 after auditors found more than £27,000 missing in the branch accounts.

In total, the government has set aside £1bn to compensate the more than 700 Post Office branch managers who were wrongly prosecuted because of a faulty IT system known as Horizon.

Sky News revealed several weeks ago that Tim Parker, the Post Office chairman for the last six years, was preparing to step down, while there have been increasingly vocal calls for Paula Vennells, the former chief executive, to be stripped of her CBE.