Japanese Prime Minister Fumio Kishida began talks with Indian counterpart Narendra Modi Saturday, with the visiting leader saying he would be urging Modi to adopt a tougher line and “take action” over Russia’s invasion of Ukraine.

Ukraine’s president said Russia is trying to starve his country’s cities into submission but warned Saturday that continuing the invasion would exact a toll on Russia for “generations.” The remarks came after Moscow held a mass rally in support of its bogged-down forces.

Meanwhile India on Friday strongly justified its right to go ahead with purchase of Russian energy after the U.S. urged the country to stop buying Russian oil and gas.

Here are the latest updates

Online classes are set to start in most colleges in Ukraine, bringing immediate but temporary relief for Indian medical students, whose education has been disrupted due to the ongoing war there.

Students said they had been informed of the move through mail from the universities in Ukraine.

“Over the past week, several thousand Mariupol residents were deported onto the Russian territory,” the council said in a statement on its Telegram channel late on Saturday.

“The occupiers illegally took people from the Livoberezhniy district and from the shelter in the sports club building, where more than a thousand people (mostly women and children) were hiding from the constant bombing.” – Reuters

Ten million have fled their homes in Ukraine: UN

Ten million people — more than a quarter of the population — have now fled their homes in Ukraine since Russia’s invasion, the United Nations refugees chief said Sunday.

UNHCR, the UN Refugee Agency, said nearly 3.4 million of the total had fled to neighbouring countries, mostly to the Polish border.

“Among the responsibilities of those who wage war, everywhere in the world, is the suffering inflicted on civilians who are forced to flee their homes,” UNHCR chief Filippo Grandi said, implicitly holding Russia.

“The war in Ukraine is so devastating that 10 million have fled, either displaced inside the country, or as refugees abroad,” he said.

UNHCR, the UN refugee agency, said Sunday that 3,389,044 Ukrainians had fled across the country’s borders since Russia invaded on February 24. – AFP

At least 902 civilians killed in Ukraine since conflict began: U.N

At least 902 civilians have been killed and 1,459 injured in Ukraine as of midnight local time on March 19, the U.N. human rights office (OHCHR) said on Sunday.

Most of the casualties were from explosive weapons such as shelling from heavy artillery and multiple-launch rocket systems, and missile and air strikes, OHCHR said.

The actual toll is thought to be considerably higher since OHCHR, which has a large monitoring team in the country, has not yet been able to receive or verify casualty reports from several badly hit cities including Mariupol, it said. – Reuters

Ukrainian authorities said Sunday that Russia’s military bombed an art school sheltering some 400 people in the embattled port city of Mariupol, where Ukraine’s president said an unrelenting Russian siege would be remembered for centuries to come.

It was the second time in less than a week that city officials reported a public building where residents had taken shelter coming under attack. A bomb hit a Mariupol theater with more than 1,300 believed to be inside on Wednesday, local officials said.

There was no immediate word on casualties from the reported strike on the art school, which The Associated Press could not independently verify. Ukrainian officials have not given an update on the search of the theater since Friday, when they said at least 130 had been rescued.

Mariupol, a strategic port on the Azov Sea, has been under bombardment for at least three weeks and has seen some of the worst horrors of the war in Ukraine. At least 2,300 people have died, some of whom had to be buried in mass graves, and food, water and electricity have run low.

“To do this to a peaceful city, what the occupiers did, is a terror that will be remembered for centuries to come,” Ukraine’s President Volodymyr Zelenskyy said in his nightly video address to the nation. “The more Russia uses terror against Ukraine, the worse the consequences for it.”

In recent days, Russian forces have battled their way into the city, cutting it off from the Azov Sea and devastating a massive steel plant. The fall of Mariupol would be an important but costly victory for the Russians, whose advance is largely stalled outside other major cities more than three weeks into the biggest land invasion in Europe since World War II. — AP

Russia said on Sunday it has again fired its newest Kinzhal hypersonic missiles in Ukraine, destroying a fuel storage site in the country’s south.

The Russian defence ministry also said it killed more than 100 members of Ukrainian special forces and “foreign mercenaries” when it targeted a training centre in the town of Ovruch in northern Ukraine with sea-based missiles.

“Kinzhal aviation missile systems with hypersonic ballistic missiles destroyed a large storage site for fuels and lubricants of the Ukrainian armed forces near the settlement of Kostyantynivka in the Mykolaiv region,” the defence ministry said.

The ministry said the base had been used for the main supplies of fuel for Ukrainian armoured vehicles in the country’s south.

Ukrainian authorities said the Russian military bombed an art school where about 400 people had taken refuge in the port city of Mariupol, where President Volodymyr Zelenskyy said an unrelenting siege by Russian troops would go down in history for what he said were war crimes.

Local authorities said the school’s building was destroyed and people could remain under the rubble. There was no immediate word on casualties.

Russian forces on Wednesday also bombed a theatre in Mariupol where civilians were sheltering. City authorities said 130 people were rescued but many more could remain under the debris. A Russian airstrike hit a maternity hospital in Mariupol earlier in the war.

“To do this to a peaceful city, what the occupiers did, is a terror that will be remembered for centuries to come,” Mr. Zelenskyy said in a video address to the nation. — AP

Ukraine’s President Volodymyr Zelenskyy has ordered to suspend activities of 11 political parties with links to Russia.

The largest of them is the Opposition Platform for Life, which has 44 out of 450 seats in the country’s Parliament. The party is led by Viktor Medvedchuk, who has friendly ties with Russian President Vladimir Putin, who is the godfather of Medvedchuk’s daughter.

Also on the list is the Nashi (Ours) party led by Yevheniy Murayev. Before the Russian invasion. the British authorities had warned that Russia wanted to install Murayev as the leader of Ukraine.

Speaking in a video address early on Sunday, Mr. Zelenskyy said that “given a large-scale war unleashed by the Russian Federation and links between it and some political structures, the activities of a number of political parties is suspended for the period of the martial law”. He added that “activities by politicians aimed at discord and collaboration will not succeed”. — AP

In peacetime, Ukraine has a thriving surrogate industry, one of the few countries where foreigners can get Ukrainian women to carry their pregnancies. Now at least 20 of those babies are stuck in a makeshift bomb shelter in Ukraine’s capital, waiting for parents to travel into the war zone to pick them up.

They’re well cared for at the moment. Surrogacy centre nurses are stranded with them, because constant shelling makes it too dangerous for them to go home. Russian troops are trying to encircle the city, with Ukrainian defenders holding them off for now, the threat comes from the air.

Nurse Lyudmilla Yashchenko says they’re staying in the bomb shelter to save their lives, and the lives of the babies, some of whom are just days old. They have enough food and baby supplies for now, and can only hope and wait for the newborns to be picked up, and the war to end. — AP 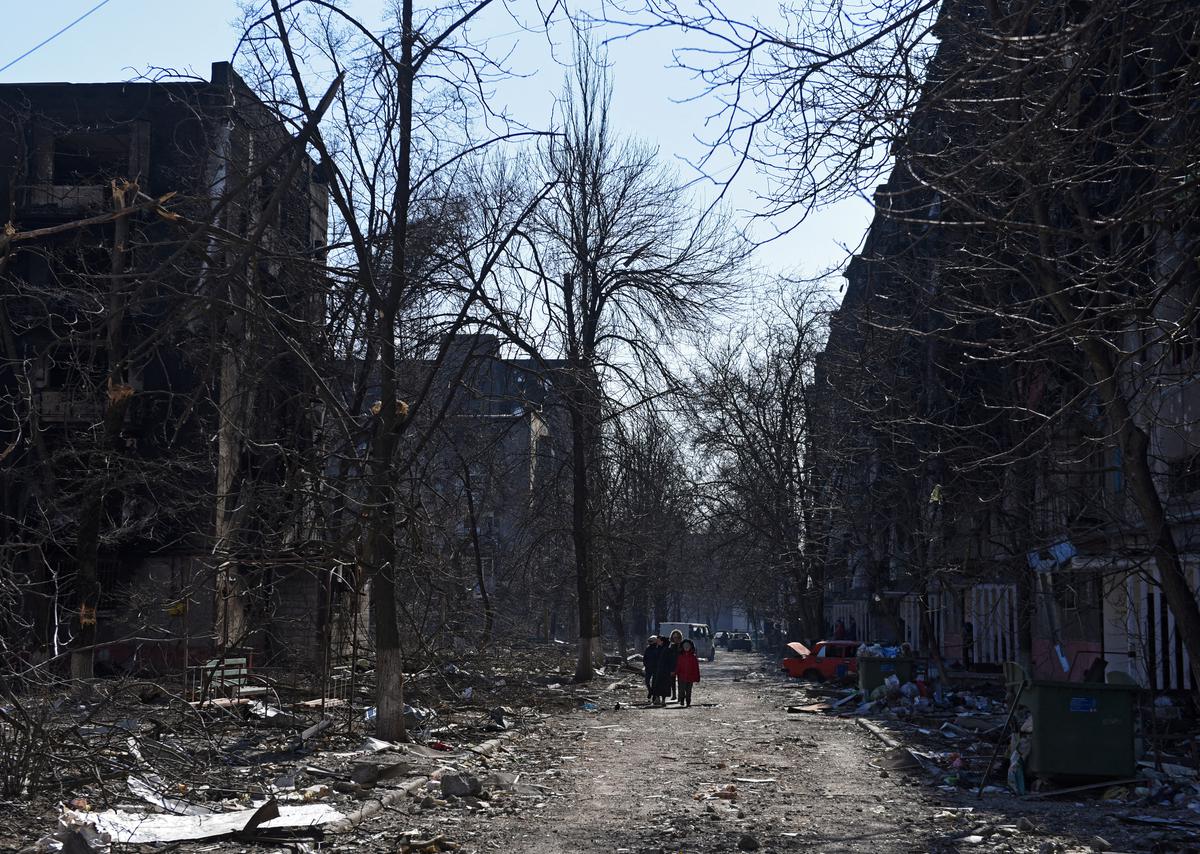 Local residents walk near residential buildings which were damaged during Ukraine-Russia conflict in the besieged southern port city of Mariupol, Ukraine on March 18, 2022.
| Photo Credit: Reuters

“Russia has failed to gain control of the air and is largely relying on stand-off weapons launched from the relative safety of Russian airspace to strike targets within Ukraine,” the Ministry said on Twitter. “Gaining control of the air was one of Russia’s principal objectives for the opening days of the conflict and their continued failure to do so has significantly blunted their operational progress.”

A Ukrainian military official meanwhile confirmed to a Ukrainian newspaper that Russian forces carried out a missile strike on Friday on a missile and ammunition warehouse in the Delyatyn settlement of the Ivano-Frankivsk region in western Ukraine.

But Ukraine’s Air Forces spokesman Yurii Ihnat told Ukrainskaya Pravda on Saturday that it has not been confirmed that the missile was indeed a hypersonic Kinzhal.

Russian Defence Ministry spokesman Igor Konashenkov said earlier on Saturday that Russian military hit the underground warehouse in Delyatyn on Friday with the hypersonic Kinzhal missile in its first reported combat use. According to Russian officials, the Kinzhal, carried by MiG-31 fighter jets, has a range of up to 2,000 kilometres (about 1,250 miles) and flies at 10 times the speed of sound. — AP

Russian cosmonauts: suits are not inspired by Ukrainian flag

When three Russian cosmonauts arrived at the International Space Station wearing yellow flight suits with blue accents, some saw a message in them wearing the colors of the Ukrainian flag. They shot that down on Saturday.

Cosmonaut Oleg Artemyev said each crew picks the color of the flight suits about six months before launch because they need to be individually sewn. And since all three of them were graduates of Bauman Moscow State Technical University, they chose the colors of their prestigious alma mater.

“There is no need to look for any hidden signs or symbols in our uniform,” Mr. Artemyev said in a statement on the Russian space agency’s Telegram channel. “A color is simply a color. It is not in any way connected to Ukraine. Otherwise, we would have to recognize its rights to the yellow sun in the blue sky.

“These days, even though we are in space, we are together with our president and our people!” — AP

Australia expanded its sanctions against Russia over the invasion of Ukraine Sunday, immediately banning all exports of alumina and bauxite while pledging more weapons and humanitarian assistance.

The export ban aims to impact aluminium production in Russia, which relies on Australia for 20 percent of its alumina. -AFP 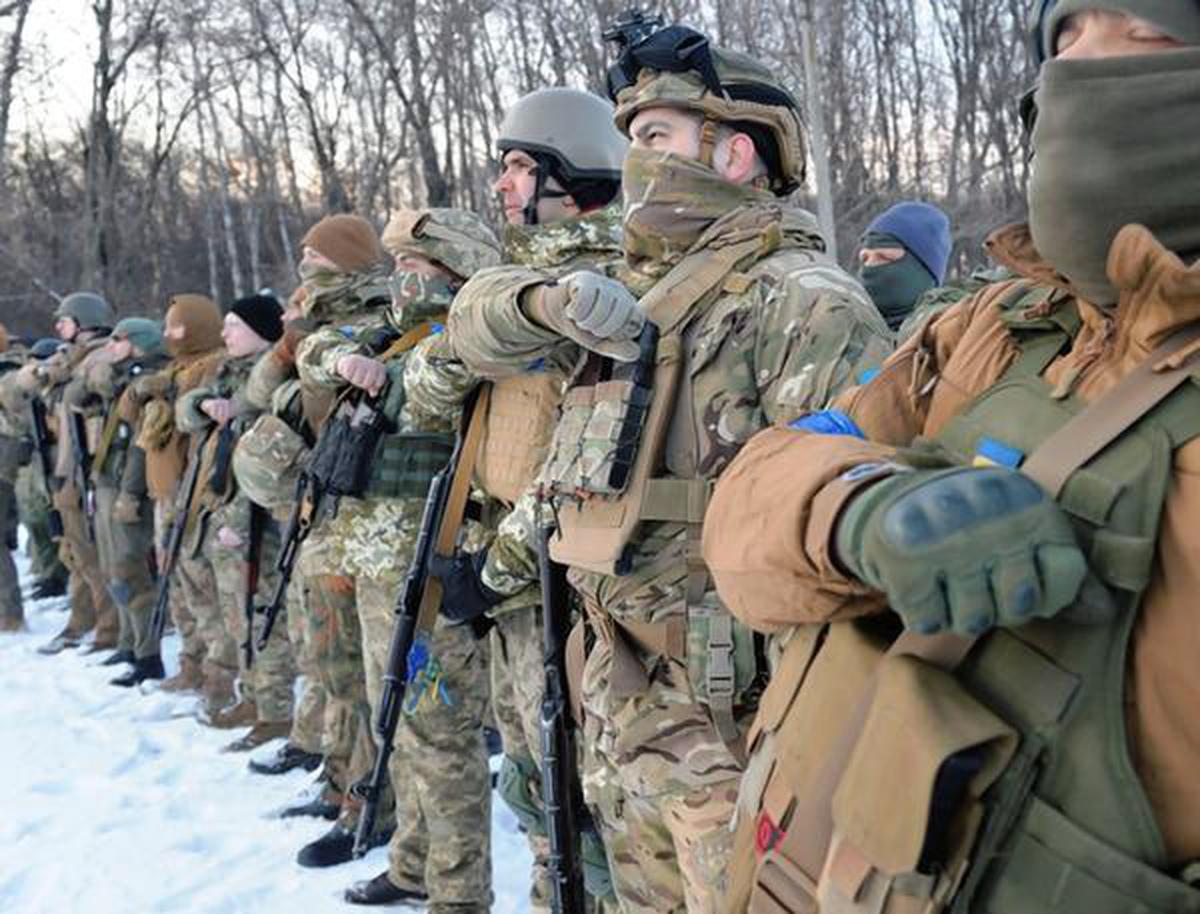 “Over the past week, several thousand Mariupol residents were deported onto the Russian territory,” the council said in a statement on its Telegram channel late on Saturday. -Reuters

A bipartisan delegation of U.S. lawmakers visiting Poland said Saturday that the most urgent need in Ukraine’s fight against a Russian invasion is to equip and support the country in every way that will help it defend its independence.

The seven-member delegation led by Rep. Stephen Lynch, a Democrat from Massachusetts, has visited reception centers for refugees from Ukraine in eastern Poland. They noted Poland’s openness in accepting refugees from Ukraine, including in private homes. More than 2 million people fleeing war have come to Poland since Feb. 24, when Russia’s troops invaded Ukraine. -AP

Ukrainian President Volodymyr Zelensky on Saturday blasted firms including Nestle for carrying on business as usual with Russia “even though our children are dying”, in a live address to a Swiss rally.

Zelensky urged Swiss companies to stop doing business in Russia and told the country’s banks to freeze funds belonging to the Kremlin elite.

Speaking to a rally outside the Swiss parliament in Bern, Zelensky condemned firms that maintained business as usual despite the siege of Mariupol. -AFP

Pope Francis has paid a visit to some of the Ukrainian children who escaped the Russian invasion and are currently being treated at the Vatican’s pediatric hospital in Rome.

The Vatican says the Bambino Gesu hospital is currently tending to 19 Ukrainian refugees, and that overall some 50 have passed through in recent weeks. -AP