Celebrities posting up at a fashion show is not exactly an unusual thing these days, when Biden grandkids show up for Markarian and various members of the “Euphoria” cast seem just about everywhere. The you-scratch-my-back-I’ll-dress-yours nature of the fame-fashion relationship is an open secret. But even by that cynical measure, the opening model of LaQuan Smith’s show, held at 9 p.m. on Valentine’s Day, caused something of a kerfuffle.

Enter Julia Fox, fresh from her breakup with Kanye West, strutting her stuff in a slinky black turtleneck tube with a troika of large cutouts around the chest, an artfully placed T-shaped strip of fabric drawing the eye in all sorts of suggestive directions, her hair pulled back in a tight little bun, a swish in her hips, and “hey buster, see what you’re missing” written all over her face. (Smith has been aware of her since he was in high school, a spokesperson said, and he thought she’d be the perfect woman to represent the spirit of the collection.) 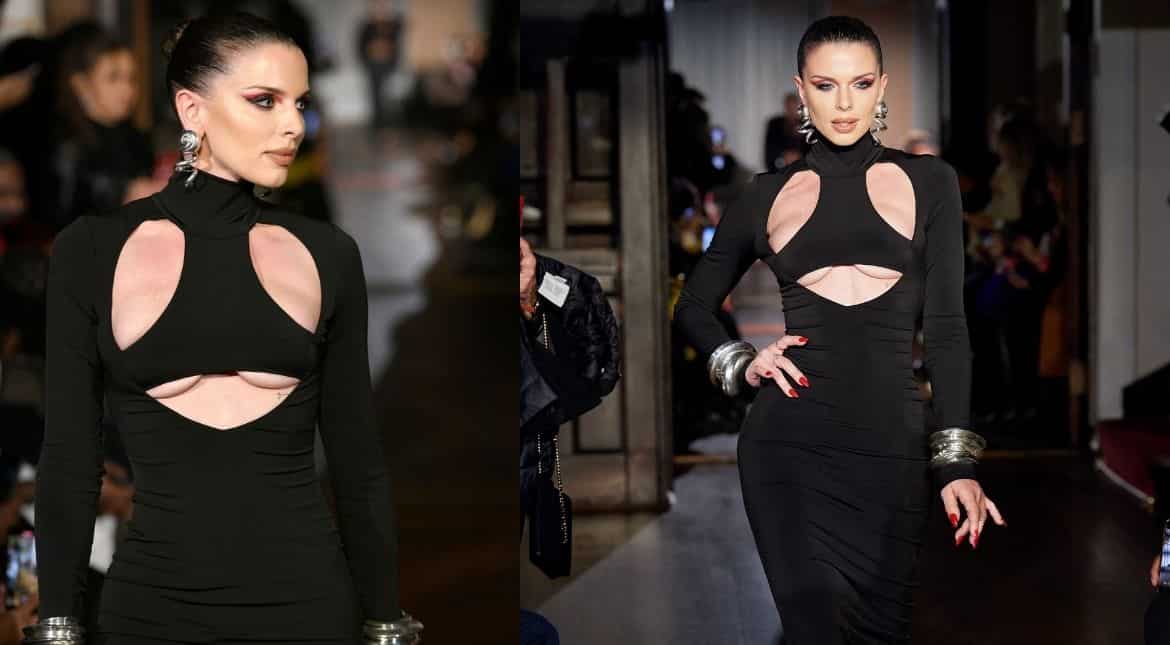 It took the concept of the revenge dress and raised it one. And offered up a pretty good example of the practical application of what might seem the most impractical fashion.

Smith can cut a mean motorcycle jacket and a slick sheepskin greatcoat, but he’s a specialist in the vernacular of trash and flash: legs, covered in sequins; curves, barely contained; bling signaling, unabashed. That’s easy to dismiss, but as Fox demonstrated, it has its uses.

It also injected some life into what has been a notably low-key fashion week.

The exuberance that permeated last season, powered by a palpable sense of the city emergent and fashion’s role therein, has dissipated. Mayor Eric Adams, one of the great political clotheshorses and someone with presumably a lot of interest in the success of one of New York’s biggest industries, is otherwise occupied. Instead of looking outward, many designers seem to be turning inward.

At its best, that creates a sense of intimacy, as at Maryam Nassir Zadeh, who likes to layer dressing tropes in weird combinations, like a schoolgirl sweater over a leather skirt over sheer pants, and whose shows often feel like an insider’s family reunion. This time, writer Ottessa Moshfegh (who provided a short story for the Proenza Schouler show earlier in the week and is starting to turn into something of a fashion muse) walked the runway in a gray knee-length secretary skirt and black leather scarf, while designers Mike Eckhaus and Zoe Latta of Eckhaus Latta cheered from the audience. (Zadeh appeared in their show Saturday.)

But when Tory Burch held her show to a glass-walled tower in Midtown, seemingly all of New York lit up and spread out below, including a fluorescent sign atop a neighboring building that read in bright red neon “New Yorker (HEARTS) Tory,” it was the rare — and useful — reminder of the world outside.

And it gave her clothes, which are getting increasingly interesting with their whiffs of midcentury chic and 1970s shades, their color-blocked geometry (a beaded T-shirt in red and blue atop a skinny turquoise turtleneck with black arms, paired with a marigold Lurex skirt and bisected by a black leather wrap belt) a grounding in the power structure in which they are meant to be worn.

That was missing from the Carolina Herrera show, held in a denatured white box, wherein designer Wes Gordon unveiled his rainbow-bright parade of full-skirted entrance gowns and bead-bedecked jumpsuits; tulle-topiary cocktail frocks and floral sheaths; a black tie bouquet of prettiness in search of a gala.

And it was missing at Coach, where Stuart Vevers built a “town somewhere in America” according to the “neighborhood newsletter” left on every seat. “A town where it’s always golden hour,” it read, “love is in the air” and “anything is possible.”

Sounds good, though in actual fact it looked more like a town in some sort of haunted suburbia, represented as it was by three lonely plywood houses, one parked car and a driveway basketball hoop — and populated by a citizenry dressed almost entirely to relive grunge, in plaid and chunky sheepskin, graphic T-shirts, corduroy, baby-doll dresses and graffiti-splashed gear. Dressed, in other words, in the former uniform of angst-ridden alienated youth, here meant to represent rose-tinted nostalgia and hope.

It didn’t make any sense. The ’90s is one of the major trends of the moment, in part because the vague free-floating anxiety of that time feels awfully familiar in this time. Vevers got the first part absolutely right but seemed to have missed the second. That left a big gap between clothes and content. And all the celebrities (Megan Thee Stallion among them) and TikTokers in the audience couldn’t fill it.

This article originally appeared in The New York Times.