The United Nations Pacific office is urging the international community to keep up the support to Tonga and help it build back stronger after the January 15 volcanic eruption and tsunami.

Recovery work is being hampered by the Covid-19 outbreak in the country with 139 cases now confirmed across villages on Tongatapu and Vava’u.

The UN resident coordinator responsible for Tonga, Sanaka Samarasinha, said the initial response from the international community has been overwhelming but there still a long road to recovery ahead.

“The assistance that has been provided so far by a number of countries has been contact-less. We are mindful of the need to follow very strict Covid-19 protocols they will be in quarantine for 14 days when they get there.”

Samarasinha said they believe there is still a need for more onground personnel but they do not want an unnecessary influx of international personnel into the kingdom.

World Bank puts a figure on the tsunami damage

The World Bank said the violent volcanic eruption, tsunami and ashfall in Tonga last month has caused an estimated US$90.4M in damages. 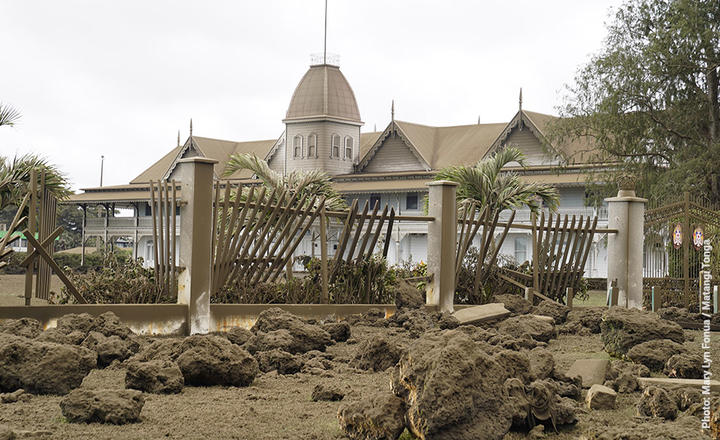 The seafront section of the Royal Palace in Nuku’alofa is blanketed in ash and there’s damage to the fence and grounds from the tsunami that followed the volcanic eruption on January 15.
Photo: Matangi Tonga

That’s the equivalent of approximately 18.5% of Tonga’s Gross Domestic Product (GDP) according to a World Bank assessment.

The Global Rapid Post-Disaster Damage Estimation (GRADE) report on the January 15 eruption was prepared by the World Bank at the request of the Government of Tonga and in consultation with other partners.

It is the first assessment published following the Tonga disaster that provides estimated costs of the physical damages caused by the volcanic eruption and tsunami.

The World Bank said broader economic losses, such as ongoing impacts on agriculture and tourism, are not reflected in the report and are expected to significantly increase the overall economic impact.

An estimated 85,000 people across Tonga have been affected by what has been described as a ‘once in a millennium event.