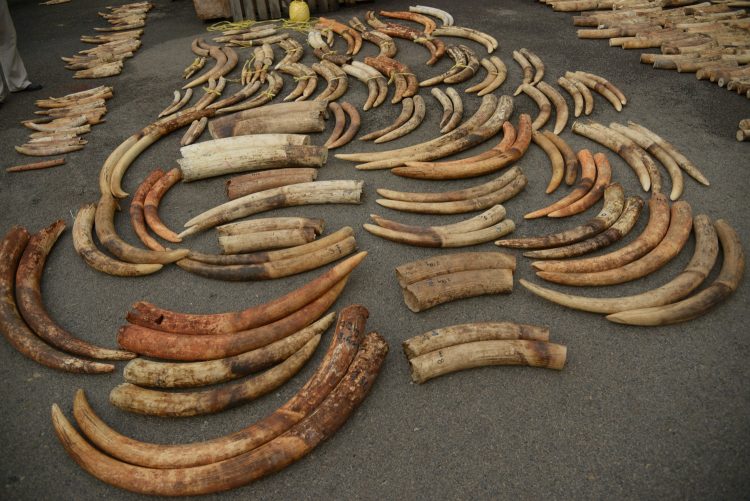 Tusks from an ivory seizure in 2015 in Singapore after they have been sorted into pairs by the process developed by Wasser and his team.Center for Environmental Forensic Science/University of Washington

A team led by scientists at the University of Washington and special agents with the U.S. Department of Homeland Security has used genetic testing of ivory shipments seized by law enforcement to uncover the international criminal networks behind ivory trafficking out of Africa. The genetic connections across shipments that they’ve uncovered exposes an even higher degree of organization among ivory smuggling networks than previously known.

The paper, published Feb. 14 in the journal Nature Human Behaviour, incorporates results from DNA testing of more than 4,000 African elephant tusks from 49 different ivory seizures made in 12 African nations over a 17-year period.

Exposing the connections among separate ivory seizures — made at African and Asian ports sometimes thousands of miles apart — will likely boost evidence against the criminals arrested for elephant poaching and ivory smuggling, and strengthen prosecutions of the responsible transnational criminal organizations, according to lead author Samuel Wasser, a UW professor of biology and director of the Center for Environmental Forensic Science, whose group developed the genetic tools behind this work.

“These methods are showing us that a handful of networks are behind a majority of smuggled ivory, and that the connections between these networks are deeper than even our previous research showed,” said Wasser.

Illegal ivory trade — along with habitat loss, climate change and other factors — has decimated the two elephant species in Africa. Although ivory seizures by authorities come from elephants that have already been slaughtered, the tusks can provide valuable information by illuminating the poaching, shipment activities and connectivity of traffickers. 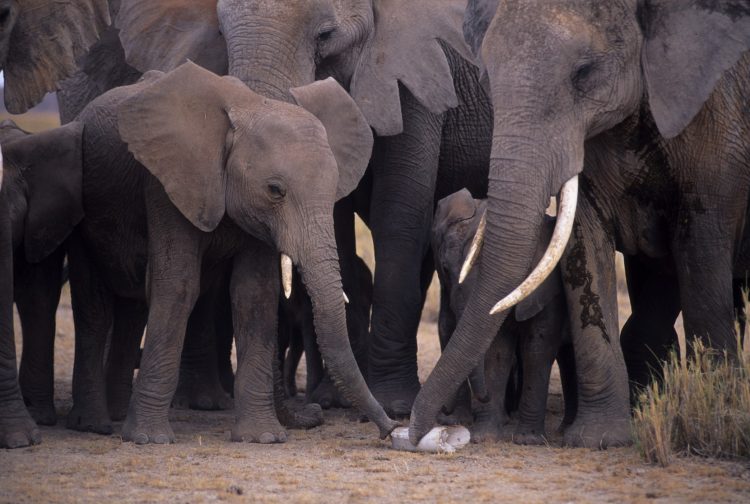 African elephants examine a bone from a fellow elephant.Karl Ammann

Previous work by Wasser and his collaborators — published in 2018 in the journal Science Advances — identified tusks from the same elephant that were separated and smuggled in different shipments prior to being seized by law enforcement. Finding both tusks from the same individual linked those seizures to the same trafficking networks. Those efforts indicated that, from 2011 to 2014, cartels tended to smuggle ivory out of three African ports: Mombasa, Kenya; Entebbe, Uganda; and Lomé, Togo.

In this new endeavor, Wasser and his colleagues expanded their DNA analysis and testing regimen to also identify tusks of elephants that were close relatives — parents and offspring, full siblings and half-siblings. Adding close relatives expands the scope of the effort, Wasser said.

“If you’re trying to match one tusk to its pair, you have a low chance of a match. But identifying close relatives is going to be a much more common event, and can link more ivory seizures to the same smuggling networks,” said Wasser. 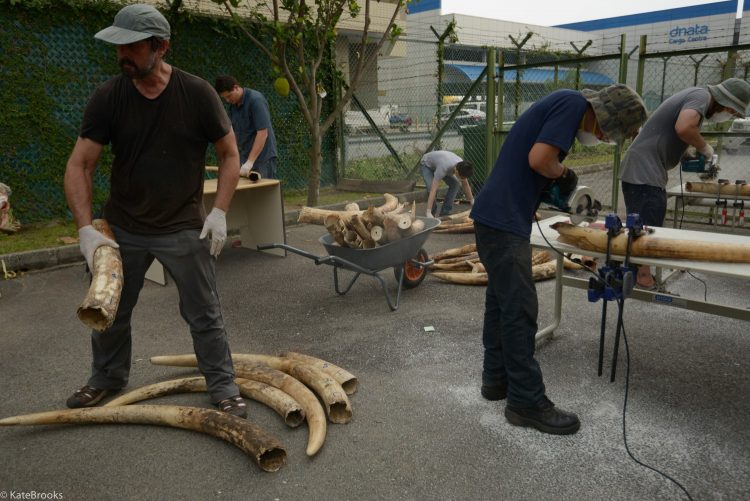 Wasser (left) and his team sort tusks from a seizure in Singapore in 2015 and use saws to cut away ivory samples for subsequent DNA extraction and genetic analysis.Kate Brooks

The team tested this expanded protocol on 4,320 tusks — from both forest elephants, Loxodonta cyclotis, and savannah elephants, Loxodonta africana — from 49 separate large shipments totaling 111 metric tons of ivory, all seized from 2002 to 2019. Results showed that a majority of these shipments could be linked based on matching tusks either from the same individual or from close relatives.

“Identifying close relatives indicates that poachers are likely going back to the same populations repeatedly — year after year — and tusks are then acquired and smuggled out of Africa on container ships by the same criminal network,” said Wasser. “This criminal strategy makes it much harder for authorities to track and seize these shipments because of the immense pressure they are under to move large volumes of containers quickly through ports,” said Wasser.

The genetic data show that a handful of interconnected smuggling networks are likely behind most large ivory shipments, most often exported from ports in Kenya, Uganda and Nigeria. By expanding the analysis to identify tusks from close relatives, the team could also link seizures from a dozen countries in Central and West Africa, stretching from Ivory Coast on the Atlantic Ocean to Mozambique on the Indian Ocean.

The larger analysis also can track how smuggling networks shifted their operations to different ports over time: from Tanzania in the early 2000s; then to Kenya and Uganda; and, most recently, to Angola and the Democratic Republic of the Congo. In West Africa, a temporal shift occurred from Togo to Nigeria. 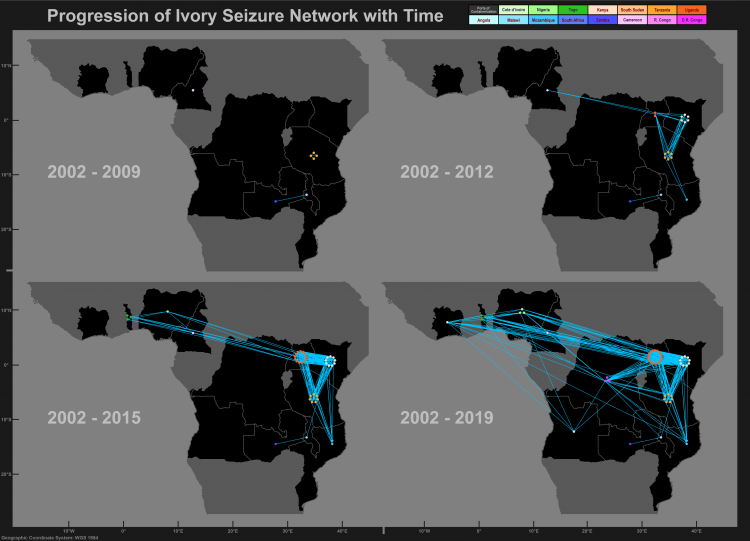 These maps illustrate shifts in smuggling operations over time to different African ports. Each solid dot represents an ivory seizure in that country. Blue lines indicate that two seizures are connected by genetic matches among tusks, physical evidence or both. Initially, savannah elephant ivory shipments were smuggled through Tanzania, Zambia and Malawi, but shifted to Kenya in 2010-2012 and Uganda in 2013-2015. Next, operations shifted to the Democratic Republic of the Congo and Angola in 2016-2019. Forest elephant ivory shipments shifted from Togo in 2013-2014 to Nigeria in 2016-2019, and showed connections to seizures in Central Africa.Wasser et al. 2022, Nature Human Behaviour

“By linking individual seizures, we’re laying out whole smuggling networks that are trying to get these tusks off the continent,” said Wasser.

The criminals behind one ivory seizure would have been prosecuted solely for that seizure. But the genetic evidence by Wasser and his team could strengthen investigations and prosecutions by linking responsible transnational criminal organizations to multiple seizures — leading to more severe penalties.

Co-authors are Charles Wolock, a UW doctoral student in biostatistics; John Brown III with the U.S. Department of Homeland Security; UW biology research scientists Mary Kuhner, Yves Hoareau, Eunjin Jeon and Zofia Kaliszewska; Kin-Lan Han, a former UW researcher who is currently a geneticist with the U.S. Fish and Wildlife Service; Chris Morris with SeeJ-Africa in Nairobi, Kenya; Ryan Horwitz, who was at the University of Michigan and is now a UW research scientist; Anna Wong and Charlene J. Fernandez with the National Parks Board of Singapore; and Moses Otiende with the Kenya Wildlife Service.