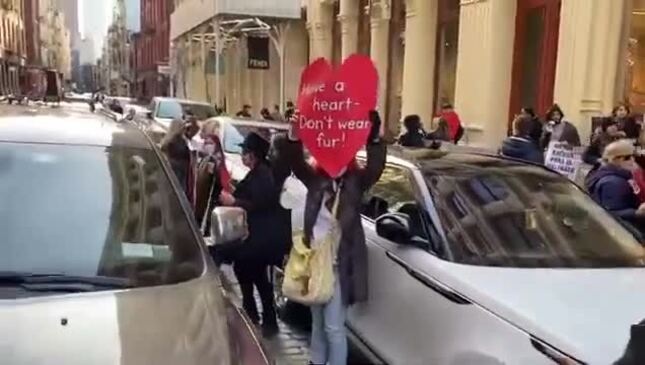 About 100 anti-fur activists protested at the stores of several luxury fashion brands in Manhattan on Saturday, February 12, the second day of New York Fashion Week, to demand they stop selling fur. Participants in the protest said they had targeted Louis Vuitton, Dior, and Fendi stores on Greene Street in the Soho neighborhood of Manhattan, and a Woolrich store a block away on Wooster Street. This footage shows the animal-rights activists thronging the sidewalk and blocking traffic on roadway outside the Dior store on Greene Street at around 3.30 pm Saturday afternoon. The crowds were led in chants of “Dior has blood on their hands” and “Shame on Dior, animal torturers.” Footage from an activist showed that fake blood and flesh was thrown onto the ground outside the Dior store during the demonstration. Credit: Anonymous via Storyful