Analysis – A “reset” National Party takes on the government during Parliament’s first week but it’s an unexceptional encounter as protests outside dominate the media. Another poll shows National gaining ground under Christopher Luxon’s leadership as Labour holds on to a strong lead. 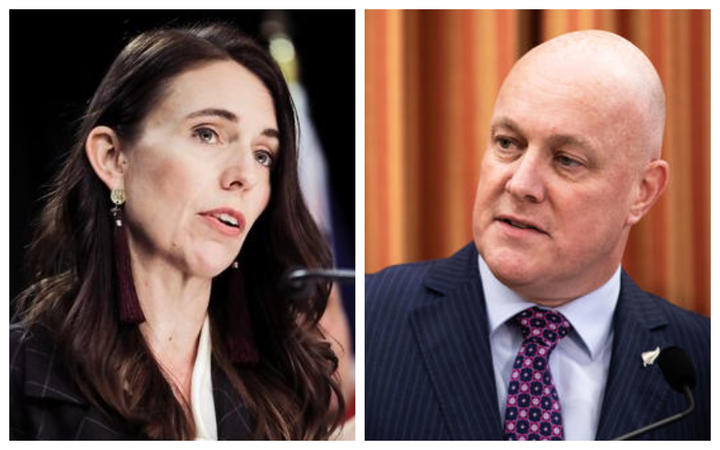 Jacinda Ardern and Christopher Luxon’s first encounter in Parliament this year was “unexceptional” as protests outside Parliament dominated the media.
Photo: RNZ

The first clashes of 2022 between Prime Minister Jacinda Ardern and National’s new leader Christopher Luxon were keenly anticipated but anyone hoping for fireworks from a “reset” opposition would have been disappointed. Parliament’s first week didn’t produce anything exceptional.

First up was the set piece prime ministerial statement that starts each year. Ardern laid out the government’s agenda, all of it previously announced. She did have a go at National, using the familiar tactic of making it appear irresponsible when it came to dealing with the pandemic.

“They declared the first of December ‘freedom day’, the day the borders should open, even when the World Health Organisation had declared Omicron a variant of concern and the booster campaign had only just begun,” she said.

“They claim they are ready to manage the pandemic because they have declared it over. They were wrong then and they are wrong now.”

Luxon’s speech in reply was also well-used, he went back as far as KiwiBuild to give examples of the government being “all spin and no delivery”.

He warned (again) of spiralling debt that would have to be repaid and said government spending was leading to a cost of living crisis. The price of a block of cheese came up.

Luxon also criticised the government’s Three Waters proposals, and made an interesting prediction: “Grant Robertson (deputy prime minister and finance minister) is worried, right. He’s been studying the polls over summer… he’s gonna come in and he’s gonna squash these reforms too. You mark my words.”

The first question time on Wednesday was described by Stuff political editor Luke Malpass as “underwhelming”, and that was generous.

Luxon didn’t bring much vigour to it. He tends to ask questions with his head down some of the time and then has to watch Ardern waving her arms around and pointing as she rejects what he has just said.

National decided to attack the government on inflation, describing the dire impact it is having on families. After Luxon, finance spokesman Simon Bridges took on Robertson. The session turned into a trading of statistics.

NZ Herald political editor Claire Trevett said it was clear Luxon would relentlessly prosecute the government on inflation this year, and thought the opposition had a good question time.

“It is a wise move: Labour would much rather be talking about Covid-19 than inflation,” she said.

“Food prices, fuel prices, housing costs and interest costs are all going up and outstripping wage increases. National’s goal is to try to ensure much of the blame for all that goes on the government.”

“Enough with the Luxon love. Has he done anything yet to deserve it?” he said.

“National’s new leader gets so much admiration beamed his way you’d think he’d already transformed his party and its policies. Some commentators even seem to think election success is almost a formality.

“There are many long weeks in politics to go before that makes a lick of sense.”

The latest Newshub Reid Research poll published this week showed National continuing to gain ground at the expense of ACT since Luxon took over the leadership.

ACT suffered a huge drop of eight points, back to 8 percent, and was overtaken by the Greens on 9.6 percent.

The trend has been consistent since the beginning of the year. An average of the three polls conducted so far was published by The Spinoff: Labour 41.8 percent, National 32.1 percent, ACT 10.2 percent and the Greens 9.8 percent. 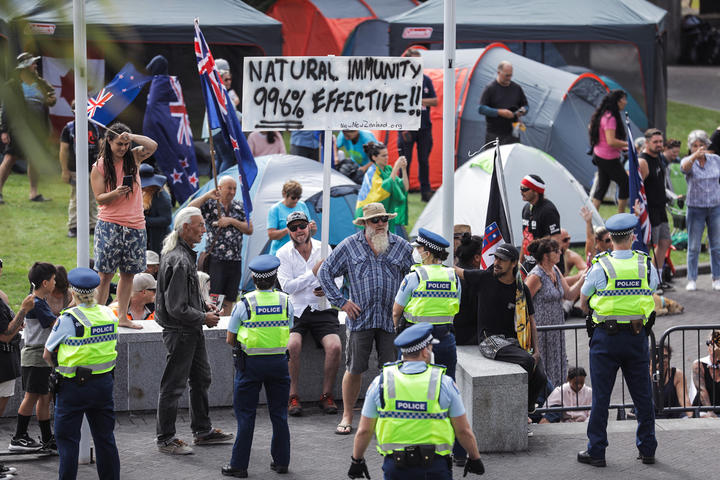 Police and protesters at Parliament earlier this week with tents set up by the protesters in the background.
Photo: RNZ / Samuel Rillstone

Gaining much more media attention than any of this was the protest outside Parliament.

Late Monday the “freedom convoy” began arriving, having gathered supporters on its route from the top of the North Island.

Around a thousand or more were reported to be on Parliament’s lawn and forecourt, where police presence was initially light.

The convoy’s stated intention was to demonstrate against the government’s vaccination mandates but there were groups reported to be opposing 1080, supporting Māori grievances and generally upset about violations of their rights.

It was unusual in that most demonstrations arrive at Parliament, speeches are made and the protesters leave.

These set up tents and vowed to stay.

It was also unusual in that they were being ignored.

The usual scenario is that at least one political party sees some gain in coming out and supporting whatever is being demanded, hoping to gather a few votes.

In this case all the parties support vaccinations, and no one came out. The protesters had no political influence whatsoever.

He said he had explained to them that National strongly supported vaccinations.

Ardern’s reaction was relatively mild. She said New Zealanders had a right to demonstrate but shouldn’t affect other people when they did so.

The crowd definitely was affecting other people, because cars and campervans were blocking roads and people coming close to the scene wearing masks were being yelled at.

On Wednesday the police presence increased and on Thursday a “state of enforcement action” was underway. The protesters were told they were trespassing and had to leave.

What happened after that made many hours of livestreaming as police slowly moved the crowd back amid scuffles and numerous arrests.

On Friday RNZ quoted Wellington District Commander Superintendent Corrie Parnell saying the protest was unprecedented. “We’ve never had an occupation on this scale… with tents on Parliament’s grounds.”

He said it could take days to clear Parliament’s lawn, but he didn’t intend the protesters to be there for another week.

During the demonstration Luxon said the government should set a clear timeline with criteria for when mandates would end. His predecessor Judith Collins said the same thing last year.

Ardern said vaccine passes and mandates would be used for only as long as there was a strong public health rationale for them.