Global market research agency HolonIQ carried out “a global estimate” on the market in a bigger “level of detail” than ever seen before, looking towards the next 10 years on a complete scale.

“Amid Covid and a broad based digital transformation, it seems counter-intuitive to many that international education has such a bright future ahead of it,” Patrick Brothers, co-CEO of HolonIQ, told The PIE News.

“Over the course of 50+ years however, the market has repeatedly demonstrated its resilience and the sheer demand from Asia, Africa and Latin America over the next 30 years underpins the strong outlook,” he continued.

The report predicts that total international education will grow from US$196bn pre-pandemic and reach $433bn by the end of the decade. It does concede that average expenditure per student “varies significantly by market and credential”, especially with regards to tuition.

“The market has repeatedly demonstrated its resilience”

“There is a lower probability we might see a Covid induced acceleration or even a deceleration, but the sheer weight of demand and desire from students to study overseas suggests the market will ramp back up to long term averages in our view,” Brothers said.

Though only slightly probable, this so-called Covid induced activity, either acceleration or deceleration, is backed up by a survey regarding sentiment among students – in April 2021, only 50% of student surveyed expected “Slower than historic growth over the next five to 10 years”.

In January of this year, however, there was a “major shift in sentiment” among respondents, with 90% instead expecting “at least a long term average recovery”.

When coming to certain source markets, the HolonIQ data showed some differing findings. Despite 70% of global demand being in Asia and Africa, over half of the top 200 universities and 55% of the top 200-500 are in the US, UK, Canada or Australia.

The survey goes on to say that while 22.8 million students study at the top 1,000 universities, Asia and Africa “lack the post secondary capacity to meet demand”.

Tuition around the world, as previously mentioned, “varies significantly” – around $10,000 up to $100,000 – within English-speaking advanced economies.

These figures vary once again looking at different source markets. The survey indicates – in the ‘big four’ countries – Australia, Canada, the UK and US – almost half of expenditure there is through tuition, with accommodation and food following. 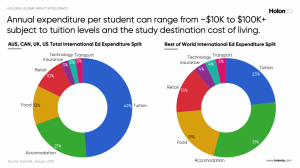 However, in the rest of the world, this figure changes – not even a quarter of expenditure is tuition, but instead 31% is on accommodation, the highest figure on the chart.

“Part of the tuition story is driven by inflation but also by the natural forces of supply and demand. With such strong demand from around the world, institutions are in a position to charge high levels of tuition whilst meeting the level of internationalisation they are seeking,” said Brothers.

“The other half of the story is markets such as France and Germany, that charge no to very low tuition domestically as well as for international students or lower GDP/capita economies that have much lower prices on a relative basis to the US, UK, Canada and Australia,” he explained.

The authors of the survey are careful to state that this student flow “adapts relatively rapidly in response to various positive and negative regulatory developments”, but the US remains the preferred destination, attracting around one in five students.

“Asian institutions are climbing the global rankings faster and faster”

The rest of the world, however, attract a “meaningful cohort” each year, with popular destination markets in China, France, Germany and Japan – Brothers’ remarks regarding the lower tuition rates in continental Europe concur, as markets in China and Russia have lower tuition levels despite attracting large volumes of students.

“Asian institutions are climbing the global rankings faster and faster and will increase their capacity and attractiveness as alternatives to studying overseas,” Brothers explained.

“If this trend played out to the extreme, we might see the big four continue to grow but lose some share to regional ‘East to East’ student flows.

“Prices will continue to rise in China and India as well, and this will increase the share of these markets from a tuition perspective as well,” he predicted.

The survey stresses that the pandemic brought international education into the “public discourse” from once being considered a “niche phenomena” to being more understood by the general population, especially as a component of higher education and workforce supply.

Commenting on the digital aspect of international education, Brothers said it would add to the industry’s future – even in the realm of travel.

“Digital it turns out, is creating a tailwind for international education with digital pathways that augment instead of substitute travel based study,” he added.