DFW International Airport and Dallas Love Field were mostly closed to travel Thursday after the cold blast of frozen precipitation iced runways, but DFW crews were able to reopen one runway by late morning.

It left hundreds of passengers scrambling for new flights and hotel rooms, and some even had to sleep on cots at Love Field hoping to get a ticket out when planes started departing again.

Flights at DFW Airport were completely grounded Thursday morning and the Federal Aviation Administration closed the airport until 11 a.m. because of icy runway conditions. Love Field stayed open, but all three commercial carriers there suspended operations for the entire day.

DFW Airport spokeswoman Cynthia Vega said one runway was reopened just before 11 a.m. “Due to ongoing weather conditions, we anticipate intermediate stoppages throughout the day to treat for snow and ice.”

Both airports’ terminals and businesses were open, although many restaurants were closed because employees were unable to get to work.

Roberto Ayerdis of Miami slept on a cot at Love Field along with about 15 other people after his connecting flight from El Paso to South Florida was canceled Wednesday afternoon.

“It’s been terrible,” he said. “There is no food, no showers and I don’t know when I’ll get home.”

Ayerdis flew to El Paso for a job interview with Customs and Border Protection and was hoping to get out before freezing weather halted flights. Nearby hotels were full by the time his flight was canceled. Fellow stranded passengers tried to order food, but delivery services also weren’t operating.

“All I’ve really had is a bottle of water,” he said, while waiting for his next scheduled flight to leave at 6 a.m. Friday.

WEATHER UPDATE: DFW has reopened our first runway for operations. Due to ongoing weather conditions, we anticipate intermediate stoppages throughout the day to treat for snow and ice. Customers should contact their airlines for all flight updates. pic.twitter.com/WeqKDXblo6

DFW Airport staff urged customers to check with their airlines for delays before heading to the airport.

At DFW, more than 1,200 of Thursday’s flights in and out of the airport were canceled, with flight disruptions mounting throughout the day. That was more than half of all of the airport’s scheduled flights.

Almost all of Love Field’s 368 inbound and outbound flights for Thursday were canceled after operators scrubbed flights Wednesday night. That left hundreds of passengers without any chance of a flight until at least Friday.

Southwest Airlines suspended its flights ahead of the storm to give travelers time to rebook later flights. 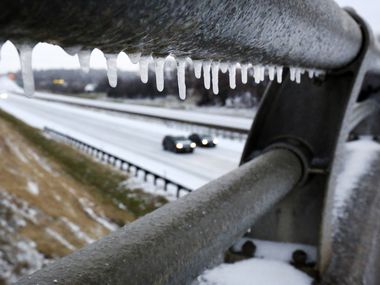 Alaina Lamphear’s flight at 3 p.m. Wednesday was originally delayed because of mechanical issues, but she said Southwest crews weren’t able to get it repaired before flights started getting canceled because of the weather. Lamphear, who is from Kansas City and in Dallas for a work conference, said she was able to call the Omni hotel and beg to get her room back until Friday.

While she got her own hotel room, several other passengers were denied financial compensation from the airline for hotels and food because the delays were tied to weather and mechanical issues, she said.

“I was on the phone until 1:30 a.m. trying to get a flight out Friday morning,” said Lamphear, who has 5- and 9-year-old daughters waiting in Missouri for her to return. “If I didn’t get that flight, it looked like there was nothing else for several days.”

She’s hoping her Friday morning flight doesn’t get scrapped, too.

According to the FAA, ground stops at DFW were issued several times throughout the morning as early as 5:45 a.m. A ground stop was even issued around 9 a.m. for gate and ramp issues.

DFW crews treated roads, bridges and overpasses near the airport to make them passable.

About 5,000 flights were canceled nationwide Thursday, according to Flightaware.com. American Airlines and its regional carriers canceled about 1,630 flights across the country, including 470 departing flights at DFW. Austin-Bergstrom International Airport also had more than 75% of its inbound and outbound flights canceled.

There could be more delays Friday morning with temperatures not expected to get above freezing until the afternoon.

What should I do if my power goes out?

Need a place to get warm? Here are shelters in your area

Everything you need to know about boil notices, frozen pipes

What to know about driving on snowy or icy roads

Do not store your food outside if you lose power. Here’s why

Will your plants survive? How to assess your North Texas landscape after deep freeze

This guide can help you pick a portable power station 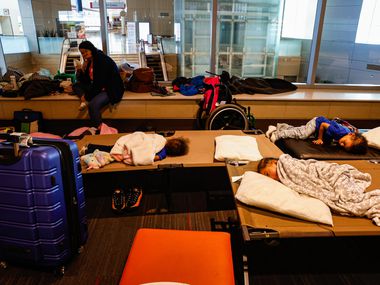 Tiger Woods back in action at Hero World Challenge: Ways to watch his return live on Sky Sports | Golf News