UP Polls: Votes From Polarisation Politics Not Acceptable To BJP: Rajnath Singh 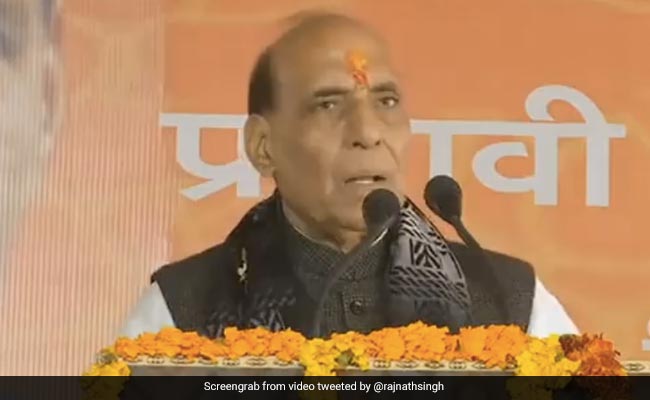 UP polls: Rajnath Singh said BJP seeks votes only on the basis of justice and humanity.

On the campaign trail in Uttar Pradesh, Defence Minister Rajnath Singh on Sunday hit out at the Samajwadi Party and said that BJP seeks votes on the basis of humanity and justice only.

Taking forward Prime Minister Narendra Modi’s jibe at Akhilesh Yadav-led party – “Red topi of SP spells red alert”, Mr Singh said, “We do not want votes on the basis of caste, creed and religion. We seek votes only on the basis of justice and humanity.”

“Samajwadi Party is doing politics of polarisation. They have crossed all limits to get the vote of a particular religion. Votes from polarisation politics are not acceptable to us,” he added.

Lauding Yogi Adityanath-led UP government, Mr Singh said, “The Samajwadi Party has to accept the fact that it was in their tenure only that so many riots took place. They need to answer why did this happen. And, you all need to understand why no one could dare to riot under the rule of Bharatiya Janata Party.”

One of the planks on which the BJP is reaching out to the people has been the drastic improvement in the law and order situation in the state since 2017.

He also coined a new term for Kasganj and said that it is Khasganj (Special Place).

Mr Singh further said that as a leader, Kalyan Singh refused to open fire at the Kar Sevaks and chose to go to jail instead.

“His contribution to the people of Uttar Pradesh was so special that’s why the government of the day under Prime Minister Narendra Modi has bestowed the Padma Award on him…,” he said.

As he signed off from the day-long campaign, Mr Singh said that this Uttar Pradesh assembly election, which happens to be the pre-final to the 2024 Lok Sabha elections, will be no ordinary election but a defining one.

It is from Uttar Pradesh that the largest chunk of 80 Lok Sabha seats comes.

Rajnath Singh’s younger son, Pankaj Singh, is in the electoral contest as he continues to contest from Gautam Budh Nagar where he is already sitting MLA.

Uttar Pradesh goes into elections in seven phases with the first phase on February 10 and the last phase on March 7. The poll results would be declared on March 10.