Ukraine-Russia crisis: Attack will have ′consequences,′ EU and US warn | News | DW


NATO Secretary-General Jens Stoltenberg said Monday that Western allies stood united in their warning to Moscow that a Russian attack on Ukraine will provoke a tough response.

“We agree that any further aggression by Russia against Ukraine will have severe costs,” Stoltenberg said on Twitter after an online meeting with US President Joe Biden and European leaders, including European Commission President Ursula von der Leyen and German Chancellor Olaf Scholz.

Scholz said Russia faced “heavy consequences” if it attacked Ukraine. The leaders had agreed “it is up to Russia to undertake visible de-escalation initiatives,” Scholz said.

Biden said the western allies were in “total” agreement on how to deal with a Russian military threat to Ukraine.

Earlier on Monday, foreign ministers from the European Union’s 27 member states met in Brussels in a bid to hammer out a response to a feared invasion of Ukraine by Russia.

After the meeting, EU foreign policy chief Josep Borrell said there is “unity” among member states on “quick and determined” action from the bloc, should Russia invade.

Borrell added the EU has pledged to support Ukraine in “key areas” including countering cyberattacks and hybrid threats, such as Russian disinformation campaigns.

However, the EU will continue “collective efforts” to convince Russia to take a “path of dialogue” in resolving tensions, he said, adding that the EU is prepared to respond should diplomacy fail.

The meeting, which was joined by US Secretary of State Antony Blinken by videoconference, comes as the United States and other Western countries urged families of their diplomats to leave Ukraine amid the crisis. 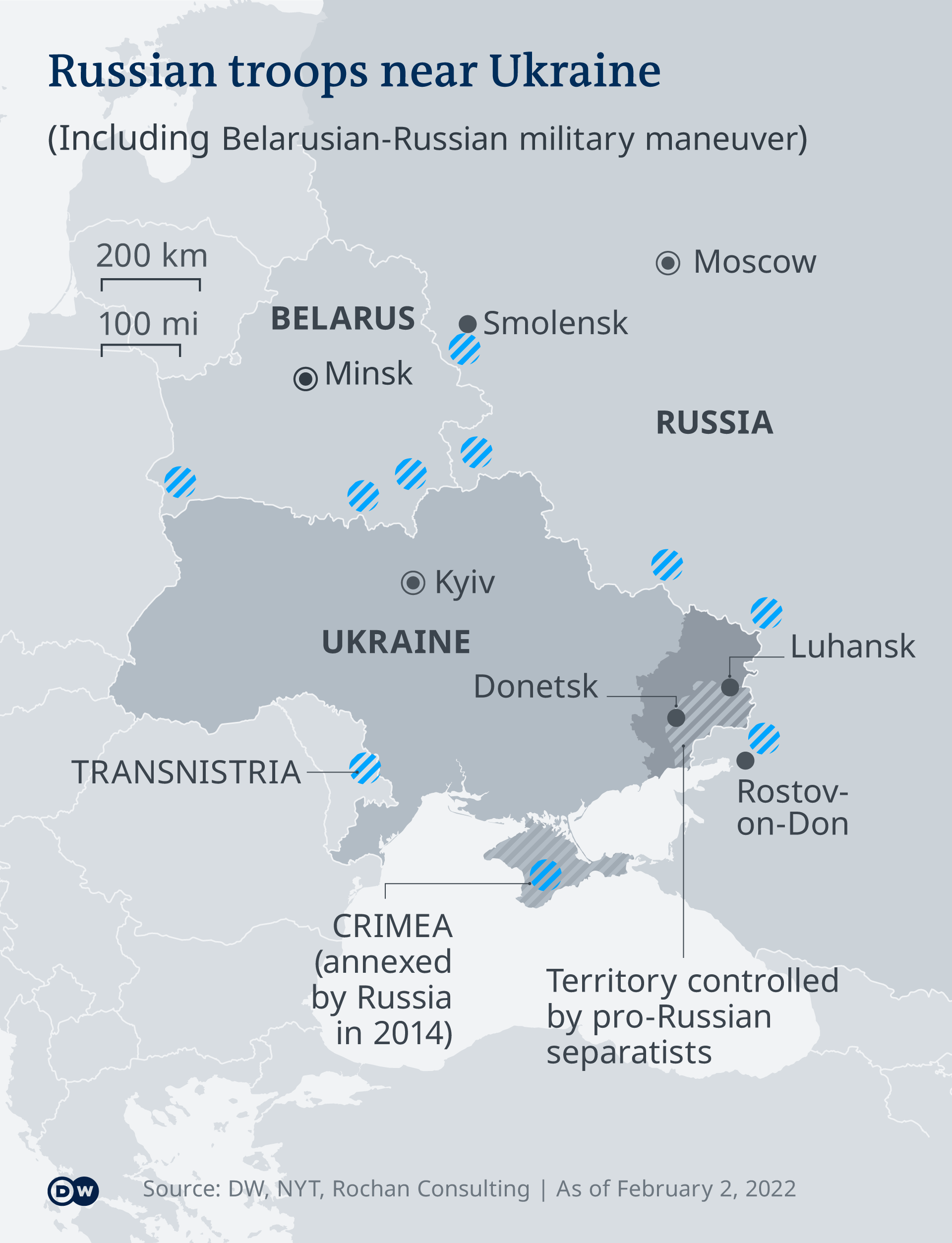 How has the EU responded?

Some within the EU feel the bloc is being sidelined in the current situation, with the Russian government concentrating on talks with the US and NATO to put forward its security demands.

However, Washington has called on all its allies to come up with economic sanctions to punish Russia if it goes ahead with the invasion.

The meeting in Brussels took place as NATO announced it would send additional jets and ships to deployments in Eastern Europe amid invasion fears.

The Netherlands, for example, is dispatching two F-35 fighter aircraft to Bulgaria from April, while Denmark will send a frigate to the Baltic Sea and additional aircraft to Lithuania.

The EU foreign ministers expressed their latest concerns about the Ukraine crisis, with some members threatening harsh sanctions if Russia moves forward with an invasion.

“We are closely at Ukraine’s side, with regards to financial support as well as economic support,” Baerbock told journalists, including DW’s Brussels Bureau Chief Alexandra von Nahmen.

“We don’t have a power to prevent this happening but certainly I’ve made it clear to the Russian ambassador in Ireland that it’s not welcome,” Coveney said.

“This package will help Ukraine now to address its financing needs due to the conflict,” von der Leyen told reporters in Brussels. She urged the European Parliament to approve the aid “as soon as possible.”

The amassing of more than 100,000 Russian troops near the Ukrainian border has raised Western fears that Moscow may be planning to invade its neighbor, though Russia has denied such intentions.

Consensus on sanctions hard to reach

The foreign ministers discussed what sanctions could be imposed on Russia should it invade, but a consensus between its members has so far been hard to reach.

Using Europe’s oil and gas imports from Russia as leverage would seem a possible option, but one that is difficult to use without detriment to the EU itself.

A proposal to cut Russia off from the global SWIFT payment system has reportedly been rejected after several countries, led by Germany, opposed the move.

At the meeting, Blinken was expected to have an “informal exchange” with the EU ministers during which he would brief them on his talks on Friday with Russian Foreign Minister Sergey Lavrov.

Those talks failed to produce any major breakthrough, but an agreement was reached to keep working to ease tensions. 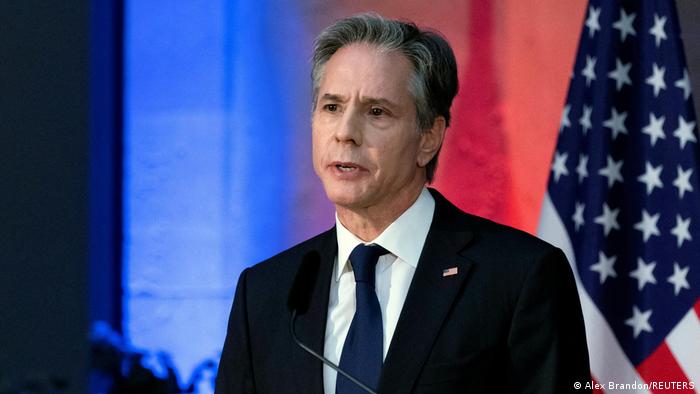 Blinken briefed his EU counterparts on his recent talks with Russia

What is the situation in Ukraine?

Moscow’s military buildup near its western border with Ukraine comes as the Kremlin seeks to push through a series of demands it says are essential to Russia’s security.

Among other things, it is calling for guarantees that Ukraine will not join NATO and for the military alliance to reduce its military presence in Eastern Europe.

The West sees the demands as an attempt by Russia to regain the sphere of influence it had before the dissolution of the Soviet Union some 30 years ago.

Moscow’s annexation of Crimea from Ukraine in 2014 has seen tensions between Russia and the West increase in recent years.

Russia has also backed a rebellion in the east of Ukraine that has claimed 13,000 lives and seen the rebels take control of considerable amounts of territory in the Donbass region.