Tyson Fury warned that Francis Ngannou hits ‘way harder’ than Deontay Wilder: ‘He has the hardest punch in the world’ | Boxing News


Francis Ngannou punches harder than Deontay Wilder and would knock out Tyson Fury if he made a boxing crossover, his manager has warned.

Ngannou will unify the UFC heavyweight championship against Ciryl Gane on Saturday night in California – it is the final fight on his contract with the mixed martial arts organisation.

“My dream since I was a kid was to become a boxer,” Ngannou has said while revealing a desire to fight Fury, the WBC champion.

His manager Marquel Martin told Sky Sports: “Francis is dangerous for Fury because the best fighter to fight Fury to date is Deontay Wilder. Deontay isn’t known for ‘sweet science’ – he’s known for his devastating power.

“With that power, he was able to successfully land some (very hard to do) power shots that put Tyson on the canvas a few times.

“I acknowledge it’s very difficult to hit Tyson. However, if Francis was to put together six to 12 months on strictly boxing, I’m confident Francis can learn the mechanics and timing he’d need to land some power shots. 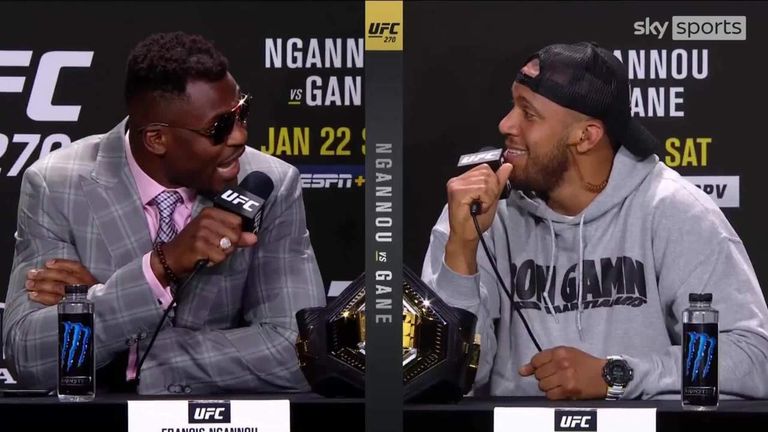 The sparring feud between Francis Ngannou and Ciryl Gane continued during the UFC 270 press conference.

“Now, I have all the respect in the world for Tyson, but Francis hits way harder than Deontay.

“That’s not an opinion, that’s a fact.

“Francis’ power has been measured and proven and the experts concluded – he has the hardest punch in the world.”

Since Conor McGregor lost to Floyd Mayweather, a series of MMA fighters have stumbled inside the boxing ring including Ben Askren and Tyron Woodley (who lost to Jake Paul) and Frank Mir (who was knocked out by Kubrat Pulev), although Anderson Silva found success against Julio Cesar Chavez Jr.

“The only thing that makes Francis different than other MMA fighters trying boxing is Francis’ reach and God-given power – a very good equaliser in times of need,” Martin said.

“Not to mention, it’s Francis Ngannou – his mindset is like no one I’ve ever known. After all he’s been through in life, he has no fear. Defying odds is what he’s built for.” 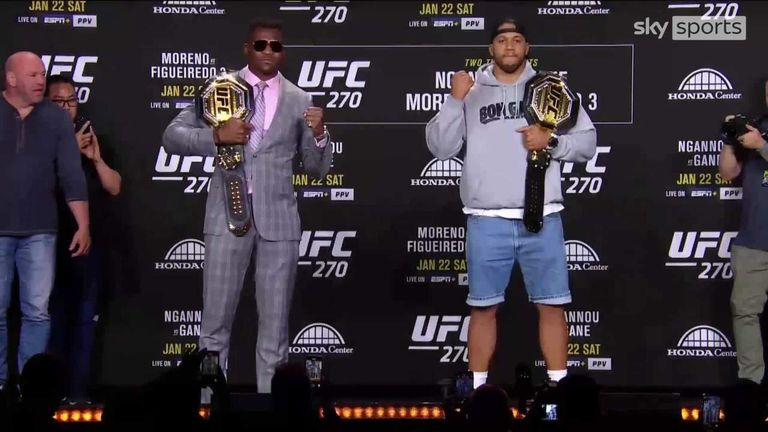 Francis Ngannou and Ciryl Gane faced-off for the first time ahead of their unification fight at UFC 270.

Ngannou has said ahead of the final fight on his current UFC deal: “I always knew that I wanted to get a part of boxing in my career before the end of my career.”

Martin said: “Obviously UFC business is priority at his current state, but Francis is very serious about boxing – that was his first dream. That’s what he left Africa to learn how to do. Not MMA. A lot of people don’t know that.”

What next for Tyson Fury?

The unbeaten WBC champion remains locked in talks to fight his mandatory challenger Dillian Whyte – the deadline to strike a private agreement, before purse bids are called, is Friday.

Anthony Joshua has triggered a rematch clause to fight IBF, WBA and WBO champion Oleksandr Usyk but a date and location have not yet been finalised.

Usyk’s promoter Alexander Krassyuk told Sky Sports this week that they are also talking to Fury about meeting next, and it remains an option.