The top-four rivals looked set to play out a drab goalless draw on Saturday afternoon as former United boss David Moyes’ well-drilled side produced a solid performance at Old Trafford.

West Ham had already won there this season in the Carabao Cup but this time United emerged victorious as Rangnick threw caution to the wind, bringing on Anthony Martial, Edinson Cavani and Rashford.

All three were involved in the third and final minute of stoppage time, with the latter turning home in front of the Stretford End to seal a 1-0 win that rocked Old Trafford to its foundations.

FREE TO WATCH: Highlights from Manchester United’s win against West Ham in the Premier League.

‘We still have to improve in possession’

“If I look at the shots on goal and the chances during the game, I think we deserved a 1-0 win,” Rangnick said.

“For me, it was clear from the very beginning it would take some patience against a well-organised team like West Ham. It was not always easy for us to find the best possible solutions in the final third.

“Defensively I think it was probably the best performance in the last eight weeks, the way that we were always trying to win balls back, our counter-pressing.

“The physicality of the game was really outstanding and we know we still have to improve with possession of the ball.”

Asked if “Fergie time” – when Sir Alex Ferguson’s United sides often won games late on – is now “Ralfie time”, he smiled and said: “I don’t know how long Fergie time was. Was that the last five minutes? How long? I wouldn’t mind if that happened!

“But, again, of course we would also like to have more games like Brentford at the end when we were 3-0 up.

“But if you score with the last seconds of the game, the big advantage is there is no time for the team to reply and that was a good one about the goal.”

‘The fans carried us through the game’

“I also enjoyed the other wins, also the win at Brentford, which was as important as the win today, but this was an extremely emotional game,” he said.

“An extremely emotional moment if you score in the last second of the game, knowing that there is no time anymore for the other team to reply.

“It was extremely emotional, I can only say thank you to the red army. The way that they supported the team all through the game – they pushed us and carried us through the game. It was amazing.

“Since I have arrived, in home games it was by far the best atmosphere in the stadium.”

‘Rashford one of the top strikers in England’

The winner was also special for Rashford, who has responded to recent criticism of his poor displays with goals against Brentford and West Ham.

“He’s one of the top strikers in England,” the interim boss said. “He’s an English international, who regularly played in the Euros and we all know what quality he has.

“He has almost everything a modern striker needs. He’s got the pace, skills, he’s got the size and physicality of a striker and in the end it’s all about confidence for strikers.

“I’m pretty sure that those two goals have raised the level of confidence within Marcus but now it’s about taking steps, to show that on a regular basis.

“It’s about continuity now and I think he can play a very important role for the rest of the season for us.”

Rashford: Very important we got the win

Marcus Rashford was delighted with his match-winning moment in front of the Stretford End.

“Very happy today and a very big game against an opponent who are very tight with us at the moment, so it was very important that we got the win,” he said.

“You might not see it now but, come the end of the season, three points can be the difference between being in or out of the top four.

“I’m pleased we managed to get them today and we have to use that as motivation.”

Rashford has now scored twice in two games having failed to find the net in his previous 11 appearances in all competitions.

“I think, for any forward, when you go through a patch of not scoring for a few games, it’s a great feeling when the goals do start coming back,” he added.

“We just have to keep moving forward now and keep going in the right direction.”

After a run of 11 games without scoring, and with his form under intense scrutiny, Marcus Rashford followed up his late strike against Brentford on Wednesday night with a crucial winner in the final minute of stoppage time against West Ham.

Ralf Rangnick’s side were seemingly heading for a goalless draw having failed to break West Ham down but, with only seconds remaining at Old Trafford, Rashford rushed in at the far post to convert Edinson Cavani’s low cross.

The goal propelled Manchester United above West Ham and into the top four, and it may prove just as significant for Rashford.

How he needed this. Rashford scored three times in his first four appearances of the campaign after returning from injury in October but the subsequent months brought nothing but frustration, his poor form eventually prompting Ralf Rangnick to use teenager Anthony Elanga instead.

Rashford is not the only one to have struggled to hold down a place in United’s attack, of course. The same is true of Anthony Martial and Jadon Sancho. But with two goals in four days, he may just have reignited his own season as well as United’s top-four bid.

Moyes: We have to see out games better 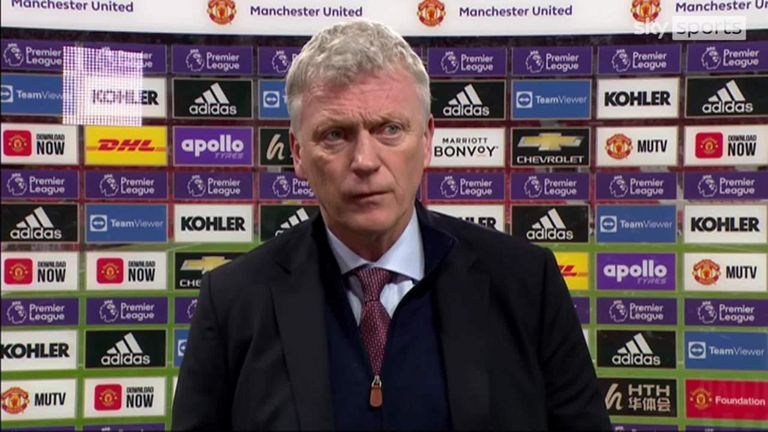 David Moyes felt that his side were naive not to see the game out late on against Manchester United but believes his side proved once again that they can challenge the top sides.

As for West Ham counterpart Moyes, his frustration came across clearly in a short response to the first question of the press conference.

It was a missed opportunity for the Hammers, who only made one substitution and came close to snatching a winner before the hosts did.

A number of West Ham fans clashed with police in riot gear at Old Trafford after their 1-0 defeat to Manchester United.

Two supporters were seen spitting towards the officers as tempers flared in the away end following the game.

West Ham are investigating the reports of trouble after the game.

“You have to know how to see games out,” Moyes said.

“Let’s be fair, people who watch West Ham regularly will see that we’ve had games where it has been a problem.

“We’ve been winning games 3-0 and it’s ended up 3-2, or had games like that, so it’s something that we need to do much better.”

What next for West Ham? Should they invest?

“I thought West Ham should have gone into the transfer market at the start of January. Things looked a bit rosier at the start of the month. They looked like they had a really good chance of getting into the top four and I thought they might invest then.

“It’s a big gamble to invest now because there are so many teams in and around them. They can go and spend £60m to £70m in the next week and they could still finish eighth. That’s how tight it is.

“There are too many big teams with games in hand on them now and if they invest, who are they going to get. I think I’d have to leave it as it is now, if I was West Ham.”