Worst Christmas on record for retailers as sales slump by 3.7% | Business News


Retail sales suffered their worst December slump on record last month as the Omicron variant was blamed for keeping shoppers away.

The 3.7% month-on-month decline in sales volumes reported by the Office for National Statistics (ONS) follows a strong November, when some consumers chose to make Christmas purchases early.

A fall in demand for petrol and diesel, due to more people working from home under Plan B rules, also contributed to the slump.

It was significantly worse than the 0.6% drop that had been pencilled in by forecasters and was the biggest December decline on records going back to 1996.

The fall was also the worst for any month since last January when Britain was coming under a tough new lockdown.

It highlighted the pressure on businesses created by the Omicron variant – and restrictions designed to tackle its spread – over the key festive season.

They will be now hoping for a boost as the Plan B rules are lifted – though separate figures published on Friday by GfK show a sharp drop in consumer confidence blamed on the surge in the cost of living.

Heather Bovill, ONS deputy director for surveys and economic indicators, said: “After strong pre-Christmas trading in November, retail sales fell across the board in December, with feedback from retailers suggesting Omicron impacted on footfall.” 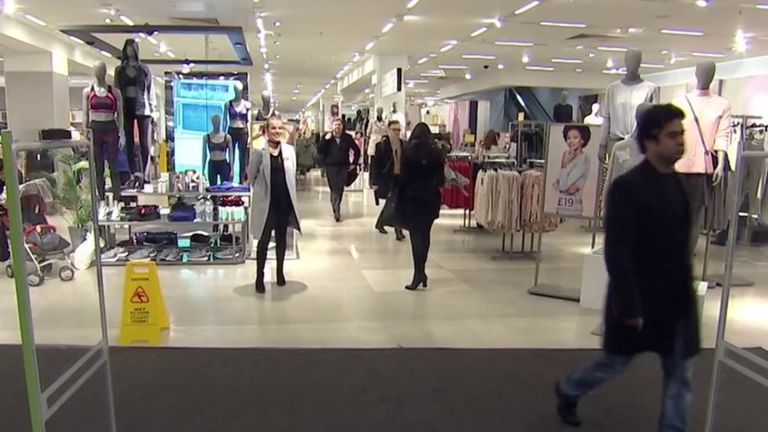 ‘Pandemic has played to M&S strengths’

The figures showed that fashion stores saw an 8% decline and department stores dropped 6.3% while food store volumes were off by 1%.

Online sales were slightly higher as a proportion of the total, at 26.6%, than they were in November, at 26.3%, according to the ONS.

She added: “With encouraging signs that the Omicron outbreak may have turned a corner and the government’s ‘Plan B’ restrictions due to be lifted next week, retail sales may recoup a bit of this fall in January and probably all of it in February and March.

“That said, with the UK’s cost of living crisis looming, we expect a weakening in the consumer recovery to dampen retail sales further ahead.”

Why are your bills going up?

Households are facing the highest rate of inflation for nearly 30 years as energy bills soar while other products such as food and clothing also become more expensive as firms pass on price pressures.

They are also due to be hit by a national insurance rise in the spring while expected Bank of England rate rises will add to the cost of monthly mortgage payments.

A GfK survey published on Friday showed consumer confidence this month falling to its lowest level since last February when the country was under lockdown.

“Despite some good news about the easing of COVID restrictions, consumers are clearly bracing themselves for surging inflation, rising fuel bills and the prospect of interest rate rises.”

What I Buy and Why: Fashion Designer Sander Lak Shows Us His Colorful Art Collection and Tells Us What He’d Steal From David Zwirner’s House